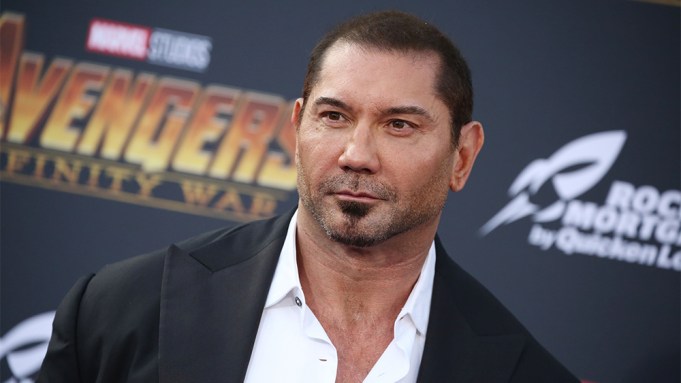 After the “Guardians of the Galaxy” cast released a statement supporting fired director James Gunn, Dave Bautista, who plays Drax in the franchise, has shared his personal thoughts on the matter and called the situation “pretty nauseating.”

Bautista wrote on Twitter Sunday that he’ll still act in “Guardians of the Galaxy Vol. 3” because he’s “legally obligated,” but that the franchise without James Gunn is “not what I signed up for.”

“It’s also pretty nauseating to work for someone who’d empower a smear campaign by fascists #cybernazis,” Bautista continued, referring to right-wing commentator Mike Cernovich, who unearthed Gunn’s 10-year-old tweets. Many viewed Disney’s firing of Gunn as capitulation to Cernovich and his followers.

“Guardians of the Galaxy Vol. 2” star Kurt Russell also weighed in on the firing recently, saying that maybe “we’re getting a little too sensitive on maybe some of the wrong people.”

Gunn was let go from future “Guardians” projects after old tweets that made jokes of pedophilia and rape were unearthed and circulated on the Internet. Though a petition signed by thousands was formed to rehire the director and numerous celebrities, including the “Guardians” cast, spoke out against the exit, Disney has no plans to bring Gunn back on board the franchise.

The ousted director apologized for his tweets hours after the firing.

“My words of nearly a decade ago were, at the time, totally failed and unfortunate efforts to be provocative,” Gunn said. “I have regretted them for many years since — not just because they were stupid, not at all funny, wildly insensitive, and certainly not provocative like I had hoped, but also because they don’t reflect the person I am today or have been for some time.”

I will do what Im legally obligated to do but @Guardians without @JamesGunn is not what I signed up for. GOTG w/o @JamesGunn just isn’t GOTG. Its also pretty nauseating to work for someone who’d empower a smear campaign by fascists #cybernazis . That’s just how I feel https://t.co/Ym4FwruVDu