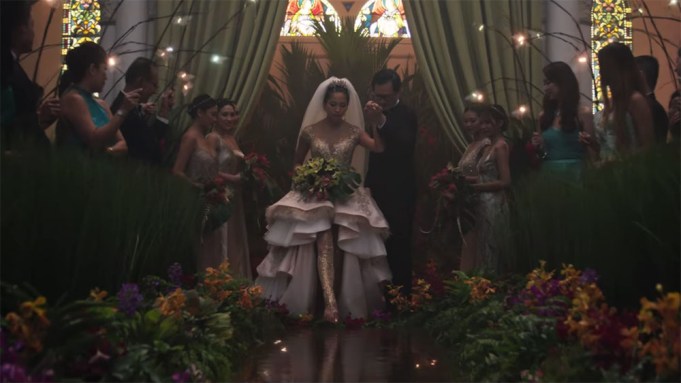 The first full-length trailer for “Crazy Rich Asians” arrived in style on Monday.

The footage opens as Rachel Chu’s (Constance Wu) boyfriend Nick, played by Henry Golding, invites her to a wedding in Singapore to meet his family.

“We’ve been dating for over a year now, and I think it’s about time people met my beautiful girlfriend,” he says.

When she arrives, she finds out his family is “crazy rich.” She is suddenly thrown into Nick’s glamorous lifestyle, attempting to impress his classy relatives.

“You really should have told me you’re like the Prince William of Asia,” Wu’s character says. “That’s ridiculous,” Golding’s responds. “I’m much more of a Harry.”

It quickly becomes clear Nick’s mother (Michelle Yeoh) isn’t the biggest fan of her son’s girlfriend. At one point she tells Rachel outright, “I know you’re not what Nick needs.” Later she says, “I know this much. You will never be enough.”

The trailer ends with Rachel confronting the tension between her and Nick’s mother. “If Nick chose me, he would lose his family,” she says. “And if Nick chose his family, he might spend the rest of his life resenting you.”

The film, based on Kevin Kwan’s 2013 novel, also stars Gemma Chan, Ken Jeong, and Awkwafina. Jon M. Chu is directing from a screenplay by Peter Chiarelli and Adele Lim.