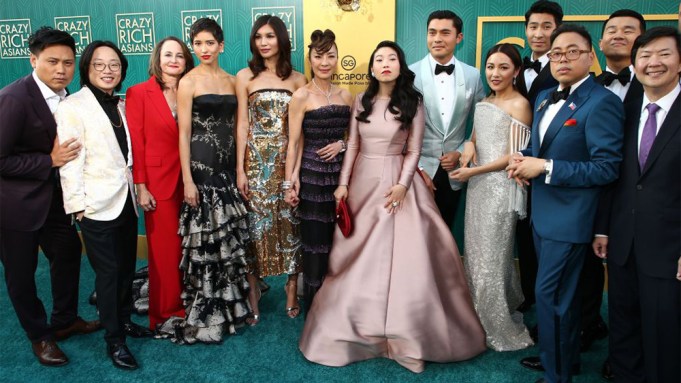 The Academy of Motion Picture Arts and Sciences presented its 4th annual Careers in Film summit on Saturday at the Samuel Goldwyn Theater in Beverly Hills.

Jacobson talked about the process of bringing the novel “Crazy Rich Asians” off the page and onto the big screen.

“What I tend to look for are, first of all, the book, the script that I can’t put down. … The thing that you can’t get out of your mind, you relate to it emotionally. You care what happens to the people in it,” said Jacobson, whose box office hit credits also include the “Hunger Games” franchise.

There were bumps along the way when bringing the movie to life; they had to replace the original writer of the film, and doubts arose about what medium was best to tell the story. In the end, her team decided it was important to give “Crazy Rich Asians” a theatrical release, and have the impact of a wide audience seeing the first “American movie with an all-Asian cast in 25 years,” Jacobson said.

Jacobson also explained how technology has brought about the biggest change in the industry over the course of her career. When she first started, the means of production and distribution “were in the hands of small groups of white men” at studios and networks, she said. Now, she believes it’s much more equal.

“These digital platforms are nothing short of revolutionary. It is an enormous democratization of opportunity,” Jacobson said. “And you no longer have to be a rich kid with rich parents who can finance your short film. You can make a movie on your phone. You can edit it, and you can put it out there, and if it’s interesting it’s going to get noticed and it’s going to get talked about. There is no barrier to creating.”

Canfield, who earned an Emmy nod for casting NBC’s “This Is Us,” echoed Jacobson’s sentiment and said social media has also helped level the playing field in casting. She spoke of a recent casting where the she and the director liked YouTube comedian Jahkara Smith so much they gave the 20-something all the support and resources she otherwise couldn’t access to go to an audition. As a result, Smith, who entered the Air Force because she had no other opportunities, “destroyed the competition” and nabbed a recurring role in AMC’s upcoming horror drama “NOS4A2.”

“People have talent and they have a voice, and now more than ever, you can be seen and you can be heard,” Canfield said. “So it feels like you’re invisible, but you’re really not. And 15 years ago, you really were.”