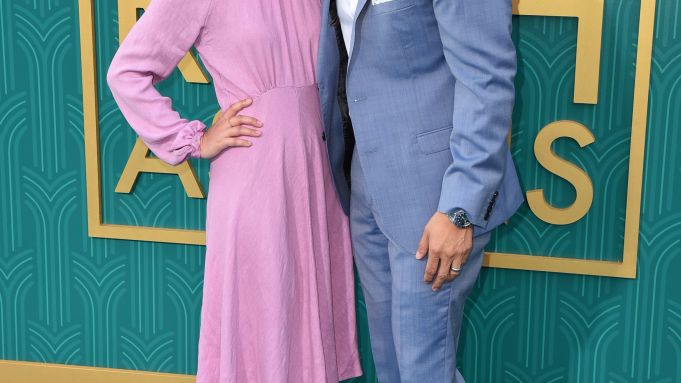 Warner Bros. rolled out the jade carpet for the Hollywood premiere of “Crazy Rich Asians.”

With the temperature hovering around 95 degrees outside TCL Chinese Theatres on Tuesday night, everyone seemed to be talking about the weather — while blotting and wiping sweat from their faces.

“Do you like how Warner Bros. managed to create Singapore-style temperatures?” producer Brad Simpson joked.

The cast and crew may have been melting, but they powered through with excitement over the movie, the first studio film featuring Asian-Americans in lead roles in 25 years.

“To be in a film that is representative of what should be, we should be normalizing all of this,” said Henry Golding, who stars in the romantic comedy about a New York University professor (Constance Wu) who accompanies her boyfriend, Nick Young (Golding), to Singapore to meet his uber wealthy family. “We shouldn’t be the only Asian film made in 25 years. That’s ridiculous. We hope that it’s a crack in the door.”

Directed by Jon M. Chu (“Step Up 2: The Streets” and “G.I. Joe”), the movie is based on Kevin Kwan’s book trilogy of the same name. The film also marks Golding’s feature debut. “The people who have watched it, myself included, have no qualms with pushing this out,” Golding, clad in a powder blue Tom Ford tux, told Variety. “We love this movie so much. The response has been so insane.”

Kwan, who also executive produced the film, said he didn’t want to rush a movie adaptation after the first book was published in 2013. “We really were purposeful about this,” Kwan said. “We knew we wanted to take our time. We knew we wanted to give the screenwriter time to really get to the heart of the story and really transform it in a meaningful way and we then wanted to wait for the amazing cast to happen…It all came together perfectly.”

Co-star Ken Jeong (“The Hangover” franchise and “Dr. Ken”) said he and his wife were early fans of Kwan’s novels and hoped it would be made into a movie. His wife, he said, urged him that if a film were made, he should become involved.

“To be a part of this movie in any fashion is deep. It’s a lot of feels right now,” Jeong said. “It’s every emotion except sadness.”

The longtime actor said the strong show of support represents the progress made by Asian talent and activists who have labored to improve film and television representation.

“To me, it’s a movement,” Jeong said. “The momentum really has been starting since ‘Fresh off the Boat.’ It’s going on its fifth year. That show never gets enough credit for what it’s done for the Asian-American community.”

Producer Nina Jacobson said the stakes were high in getting the film right.

“We always felt huge pressure that Asian and Asian-American actors in Hollywood movies are one of the most underrepresented, one of the most invisible and narrowly defined groups,” she said. “Maybe you get to be a certain kind of character, but you don’t get the full range of human personality and emotion offered to you.”

Because so few films such as this are made, “there are no comps for a movie like this,” she said. “We’ve become the comp and you want to become a good comp.”

The premiere’s star-studded guest list included Daniel Dae Kim (“Lost,” “Insurgent,” and “Hawaii Five-O”), Randall Park (“Fresh off the Boat” and “Ant-Man and the Wasp”), Steven Yeun (“The Walking Dead” and “Sorry to Bother You”), and comedian Margaret Cho.

Following the premiere, cast, crew, and others gathered for a swanky and intimate rooftop party at the Dream Hotel in Hollywood with a menu that featured dumplings, satay, and other Asian finger foods.