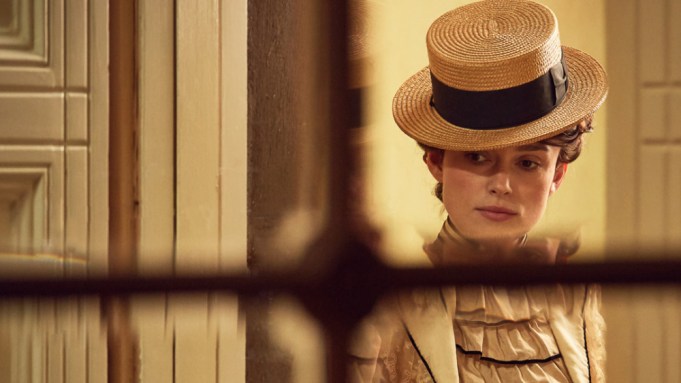 Bleecker Street released the first trailer for the upcoming biopic “Colette” on Wednesday.

Keira Knightley stars as the eponymous Parisian novelist struggling through an abusive and exploitative marriage to Henry Gauthier-Villars, played by Dominic West. During their marriage, Gauthier-Villars forced Colette to write her famous Claudine novels under his name, reaping the fame and financial rewards that came with the novels’ success. The footage opens at the outset of their marriage at a lavish dinner party, where one of the attendees remarks, “The wild days are done, eh?”

“On the contrary — the wild days have just begun,” Colette replies, setting the scene for rebellion.

Colette beings recounting her early days ghost writing under her husband’s name. “My name is Claudine,” Knightley’s voiceover says. “I live in Montigny. I should probably not die there.”

But as her works reap more success, particularly with the audience of young women, Colette becomes unsatisfied with her nonexistent bylines.

“You found me when I knew nothing,” her voiceover continues, supplementing a montage of resistance against her abusive husband. “You molded me to your own desires. And you thought that I could never break free. Well, you’re wrong.”

The footage also touches on Colette’s love affair with a woman, which she continued in spite of her husband. While her husband suspects Colette’s infidelity, she assures him his “jealousy is misplaced.”

“It was the wife I was interested in,” she taunts.

Colette ends the trailer on a note of reclamation, finally becoming the author of her own story. “The hand that holds the pen writes history,” she says.

Knightley told Variety for a recent cover story that screenwriter Richard Glazer and director Walsh Westmoreland labored for 15 years to get the film financed. She said the timing of the movie’s release in the midst of the Time’s Up and Me Too movements isn’t coincidental. She said the pic’s plot revolving around Colette’s revolt against her abusive husband and her affair with Marquise de Belbeuf, a notable gender-defying lesbian artist of the time, draws parallels to the stories being told today.

The film premiered at the Sundance Film Festival and is set to hit theaters on Sept. 21.