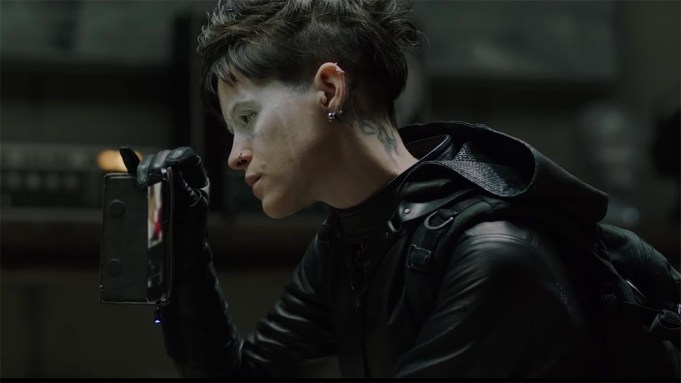 A tattooed Claire Foy is delivering vengeance as Lisbeth Salander in the first trailer for Sony’s “The Girl in the Spider’s Web.”

The trailer showed Foy — best known for portraying Queen Elizabeth in Netflix’s “The Crown” — as she uses an intricate trap to capture a villainous husband, and then coldly telling him as he hangs upside down that he will turn over his assets to his abused wife.

“I’m a fan of yours — the CEO who beat up two prostitutes, but then got acquitted in court yesterday,” she says. “I’m transferring 20% of your cash to these two girls, the rest I’m transferring to your wife.”

She then tells the wife, who’s also been beaten up, “He won’t hurt you again.”

The studio decided two years ago to replace Rooney Mara with Foy as the precocious Swedish computer hacker for “The Girl With the Dragon Tattoo” sequel, seven years after the original opened. Fede Alvarez, who helmed 2016’s “Don’t Breathe” for Sony, is directing.

The new trailer features plenty of chase scenes and gunplay amid snowy landscapes and warns “The past never forgets.”

Lisbeth Salander was created in “The Girl with the Dragon Tattoo” by the late Swedish author and journalist Stieg Larsson. The book, the first of the Millennium trilogy, was published posthumously in 2005 and become an international bestseller.