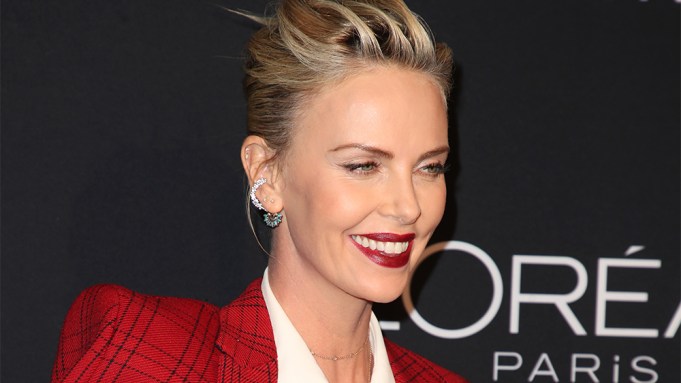 Charlize Theron may have been in for a night of celebration at Elle’s Women in Hollywood event where she was an honoree, but that didn’t prevent her from getting serious on the red carpet.

After posing with Lady Gaga (“Yes, I’m a total fangirl,” she says. “And also just because my kids love her so much; I have just scored such cool points.”), Theron took a moment to talk about how the #MeToo has changed Hollywood.

“I feel like for me the most important thing is that it’s pretty impossible to go anywhere and not have people talk about this,” she told Variety‘s Marc Malkin at the Four Seasons Beverly Hills Monday. “And that conversation — I feel like with any issue, if you can’t keep the conversation going, it’s impossible to sustain any momentum.”

She elaborated on the effect of Time’s Up and #MeToo, explaining that for the first time, inappropriate conduct at the highest levels is starting to have consequences.

“I think we’ve lived in a world where women have been so let down for so many years, in a very unhealthy way, we’ve almost gotten used to it,” the actress said. “So to see some accountability for some of the actions that are just deplorable, is…it feels like we are finally being heard and that things aren’t being brushed under the rug anymore. These are civil rights, this is just something that should have already been and we should have been done with.”

One historic moment that took place in the context of the #MeToo movement was Dr. Christine Blasey Ford’s accusations against Supreme Court justice Brett Kavanaugh during his confirmation process. Ford testified before the Senate Judiciary Committee about her memories of the alleged assault — testimony that President Donald Trump went on to mock during a rally in Mississippi.

“Extreme sadness because I can’t imagine if that was his daughter, how he would feel if somebody did that,” Theron said. “And I think sometimes it’s really hard for people to put themselves in that person’s shoes, and I don’t know why, it’s just plain empathy.”

“One person who’s here tonight who’s giving me the award, Kathleen Kennedy, is just a woman that I am just in awe of,” Theron said. “For her to have an over 35, 40-year-old career span and what she’s done, it just makes me feel like anything is possible. And I love having mentors like that in my life.”