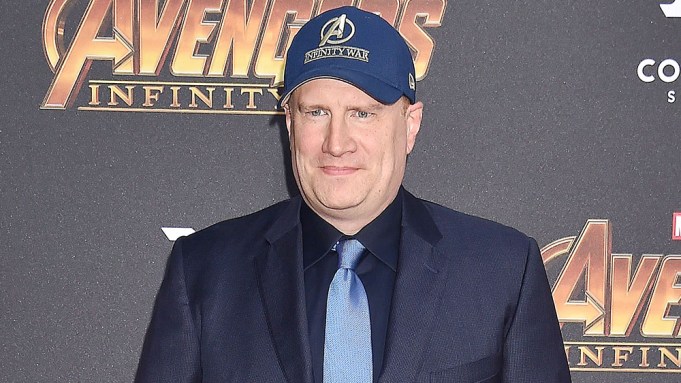 Kevin Feige, producer and president of Marvel Studios, hinted at what fans can expect from the upcoming “Captain Marvel” film starring Brie Larson.

At the world premiere for Marvel’s latest film “Avengers: Infinity War,” the man behind the comic book giant gave updates on the current production of “Captain Marvel.”

Without giving too much away or spoiling the film, Feige did tease set designs. “In the ’90s there were things called video stores,” he explained. “You could go into video stores and you could pick up VHSs and decide what movies you wanted to go see. I miss that. That was fun. We’re doing certain sets that look like that and it’s fun to be back in that era because I’m old.”

Feige built anticipation for the movie as he promised, “You’re going to get the most powerful superhero that we’ve ever introduced with, I think, one of the most unique and inspiring origin stories.”

He noted that the movie is “less than halfway through filming.”

The film will allow the Marvel Cinematic Universe to depict an era it has never explored before: the ’90s. Feige also revealed that the film will follow Samuel L. Jackson’s character Nick Fury who “thought the Cold War is over [so] the best days are behind him.” He continued, “He encounters certain things in this movie. It sets him on that path that leads us to where we are 19 films later.”

Those who have seen “Avengers: Infinity War” will know the film even references Captain Marvel and her connection to Fury.

Although “Captain Marvel’s” release date is almost a year away, it will arrive before the final “Avengers” film.