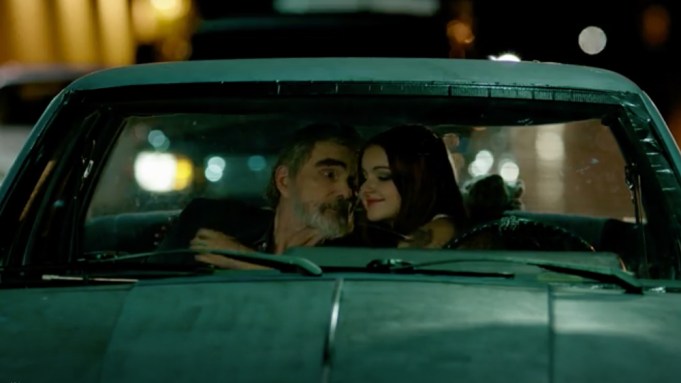 The Burt Reynolds movie “The Last Movie Star” premieres in theaters and on VOD today, and Variety has a first look at the debut music video for the film, “Yet to Come,” which riffs on the movie’s primary Nashville setting. Scenes of Reynolds and costar Ariel Winter (“Modern Family”) cruising through Music City’s downtown streets are inserted into freshly shot footage of a previously unknown Nashville duo, Stranger Friends, busking in front of Tootsie’s and other locations familiar to tourists who flock to the town’s thriving Lower Broad district.

Surely it was tough getting permits to close down Nashville’s busiest block on a weekend for a music video shoot, right? Actually, no permits were involved, according to writer-director Adam Rifkin. “Somehow, when we’ve been making independent films for long enough,we know we know that if you ask the right way, almost anything is possible,” he tells Variety. “So we got lucky. It was the biggest thrill when we convinced the police to block off the street so we could shoot John [Martin] and Jamie [Floyd] in the middle of the iconic strip. How we convinced them to bust out the sawhorses and block off Saturday night traffic for our little music video is a miracle.”

“Yet to Come” isn’t Stranger Friends’ only contribution to the film. They have 12 songs in “The Last Movie Star”— quite a break for a duo who only had one five-song independent EP out prior to the release of the Sony soundtrack this week. “I love it when movies use one artist throughout a film,” says Rifkin (who has some history with music movies, having helmed the KISS-themed “Detroit Rock City”). “What ‘Harold and Maude’ did with Cat Stevens, or how ‘The Graduate’ used Simon and Garfunkel — I always thought that was a cool way to do it that had cohesion, so I was thrilled to be able to use Stranger Friends’ songs all throughout the movie.”

The movie focuses on Reynolds’ visit to a rather threadbare fictional film festival in Music City (not to be confused with the real, robust Nashville Film Festival, where “Last Movie Star” did play after its Tribeca premiere). “I wanted the music of the film to reflect the feel of the location, and also reflect the feel of Burt’s Southern roots, because Burt is a Southern boy,” Rifkin says. “So I had been discussing with the producers that it would be great to embrace the Nashville sound on the soundtrack, because how can we shoot in Nashville and Knoxville and not do that?”

One of the producers, Gordon Whitener, knew the then-unnamed musical duo, and suggested they impress Rifkin by writing some original material. “He slipped them a copy of the script without my knowledge,” Rifkin says, and when they played him a few songs, he was gobsmacked at how they’d unknowingly captured the film’s themes, until they confessed everything had already been tailored to the screenplay. “I shamelessly took complete advantage of their enthusiasm to ask them for more and more songs throughout the rest of the shoot and editing process — I’d shoot them a text and ‘Hey, if you could write a song that kind of feels Hank Williams-inspired here,’ or ‘something that feels John Prine-inspired there’ —  and by the time we locked picture, we had a dozen of their original songs in the movie.”

Independent of the duo’s contributions, “there was still an available slot, which was the end credits song, and we got lucky enough to get Diane Warren to want to write a song for that spot and Willie Nelson to record it, which is the most incredible cherry atop the sundae.” The Nelson/Warren song, “To Get Here,” is the only non-Stranger Friends song on the soundtrack, and is due to have its own music video eventually.

But Rifkin’s softest spot may still be for “Yet to Come,” “and one of the reasons that I love that song so much is that it’s beautifully placed toward the end of the film and has such a feeling of wistful hope. Burt’s character in the movie, Vic Edwards, starts out in the story having a lot of regrets in life, but by the end, he’s far more hopeful and realizes that everybody makes mistakes along their journey and that doesn’t mean you have to have any regrets. He comes to learn that the best in his life is still yet to come, even at 82 years old. So I was so happy the song they wrote so perfectly captured that feeling” — and happy to find a different setting for it as a music video.

“The Broadway strip in Nashville is such a neon wonderland of honky-tonks, with a symphony of country music wafting out of every doorway, so packed with people you can barely move — so I thought it would be a nice contrast to take this this very active, visually exciting city and have this sweet, poignant song juxtaposed against it.”