Box Office: ‘Venom,’ ‘A Star Is Born’ Both Head for Big Opening Weekends 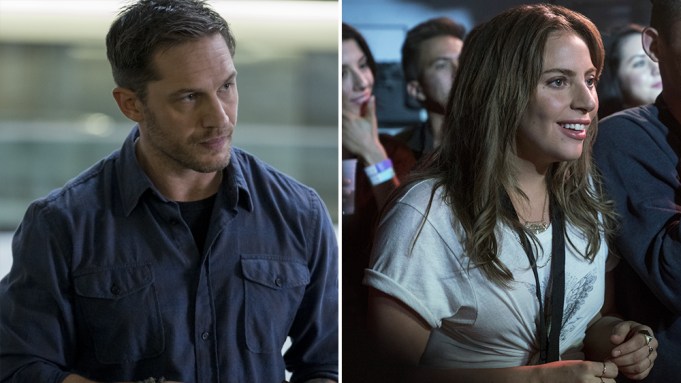 In the fan-made feud between “Venom” and “A Star Is Born,” the real winners are movie theaters.

Tom Hardy’s “Venom” is heading for a robust $70 million-plus opening weekend and Lady Gaga’s “A Star Is Born” should score impressively with around $45 million, early estimates showed Friday.

Both titles are coming in at the top end of forecasts and signal a dynamic start to the fall moviegoing season in North America and the biggest October weekend ever. Sony continued to downplay projections with a $55 million prediction, even after “Venom” scored $10 million in Thursday night previews, becoming the top October Thursday night title ever.

Warner Bros. has boosted its projection for “A Star Is Born,” directed by Bradley Cooper, to the $35 million range after launching with a solid $4.6 million in preview and sneak showings. But the early numbers indicate the fourth iteration of “A Star Is Born” is heading for a slightly higher opening weekend gross.

“Venom,” starring Hardy as a fearsome antihero, is expanding Friday to 4,250 venues, with expectations ranging from $55 million to $70 million for the weekend. It’s a slam dunk to become the top October opener, easily besting the record set in 2013 by Alfonso Cuaron’s “Gravity” with $55.8 million.

Ticketing serivce Fandango reported Friday that “Venom” and “A Star Is Born” together set a Fandango presales record for most advance tickets sold for any weekend in October. Both films are on track to beat Fandango’s current October opening weekend record-holder, “The Martian.”

“Venom” has received mostly negative reviews with a 32% score on Rotten Tomatoes (fans are receiving it more warmly, however, with an 88% audience score on the website). Sony is hoping “Venom” will launch a shared universe similar to Disney’s lucrative superhero franchise. “Zombieland” director Ruben Fleischer helmed the film, which carries a lofty $100 million budget. Hardy portrays Eddie Brock, a journalist bound to the alien entity known as Venom.

“A Star Is Born” will likely benefit from glowing word of mouth. Critics have embraced “A Star Is Born” with a 92% score on Rotten Tomatoes. It’s already stirring up awards-season buzz following its Venice and Toronto film festival showings. Cooper portrays an alcoholic singer who discovers and falls in love with an up-and-coming artist, played by Gaga in her first leading role.

“Venom” and “A Star Is Born” are coming into the market on the heels of a solid September, the second-best of all time, behind only last year’s. Overall domestic business for 2018 has totaled $8.93 billion as of Oct. 3, up 8.1% over last year, according to comScore.

The second weekends of Warner’s animated “Smallfoot” and Universal’s comedy “Night School” will be battling for the third slot with about $15 million each. “Night School,” starring Kevin Hart and Tiffany Haddish, won last weekend and has taken in $33 million in its first six days.

Fox is also launching its drama “The Hate U Give” in 36 locations Friday before going wide on Oct. 19. Amandla Stenberg stars in the adaptation of the Angie Thomas novel about a high schooler dealing with the aftermath of the death of her friend in a police shooting.