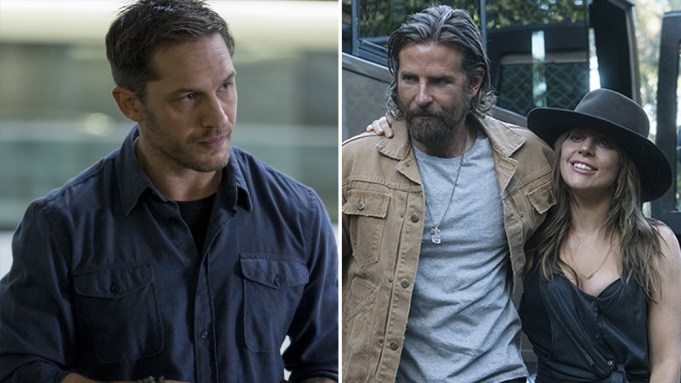 October should start strong as two releases targeting vastly different audiences will open at the box office. One stars a shocking otherworldly being. The other is “Venom.”

Early estimates show Tom Hardy’s “Venom” is heading for a lofty $60 million to $65 million debut, while “A Star Is Born,” the musical drama starring Bradley Cooper and Lady Gaga, is eyeing $28 million to $30 million.

Sony, the studio behind “Venom,” is tempering expectations, predicting $55-$60 million. Even if “Venom” hits the lower part of that range, it will rank as the biggest October opening, not adjusted for inflation. That distinction currently belongs to Alfonso Cuaron’s”Gravity,” which launched with $55.8 million in 2013.

Ruben Fleischer directed “Venom,” the superhero film intended to launch Sony’s Marvel Universe. It’s separate from Disney’s Marvel Cinematic Universe, and Sony is emphasizing that Venom isn’t hanging around with the friendly neighborhood Spider-Man. The studio is touting “Venom” as darker-than-your-average Marvel movie. Hardy stars as the eponymous antihero, also known as Eddie Brock, a journalist bound to an alien symbiote that gives him powers. Michelle Williams, Riz Ahmed, and Jenny Slate round out the cast.

After a Spandex-filled summer, “Venom” is the first superhero film to hit multiplexes since “Ant-Man and the Wasp.” Sony is hoping fans are hungry for a comic book movie to justify “Venom’s” $100 million budget.

Warner Bros. is also being conservative with “A Star Is Born,” predicting a release of around $25 million. Cooper’s buzzy directorial debut could climb even higher if its rapturous response at this year’s Venice and Toronto Film Festivals is any indication. Cooper plays an alcoholic country rocker who discovers and falls in love with an up-and-coming artist (Gaga). The cast also includes Dave Chappelle, Sam Elliott, and Andrew Dice Clay. It’s the third remake of the original 1937 film, which was adapted into a 1954 musical and a 1976 film with Barbra Streisand.