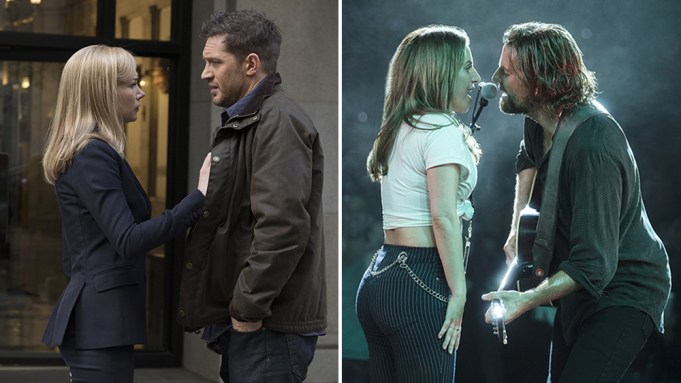 The unlikely dynamic duo of “Venom” and “A Star Is Born” have livened up the fall moviegoing season with the best October weekend of all time in North America.

Tom Hardy’s superhero tale “Venom” grabbed $80 million at 4,250 sites for Sony and Marvel while the Lady Gaga-starring remake of “A Star Is Born” earned an estimated $42.6 million at 3,686 locations for Warner Bros. — both well above pre-weekend forecasts. “Venom” smashed the record for an October opening, topping the $55.8 million launch of “Gravity” by 43%.

“Venom” also dominated at the international box office with $125.2 million, setting an international record for an October opening. South Korea led the way with $16.3 million.

“Venom” and the critically acclaimed “A Star Is Born” were both able to draw effectively from beyond their core audiences. The strong domestic openings pushed the weekend’s total business to about $174 million, or 15% above the prior mark of $151.5 million set in 2015 when Matt Damon’s “The Martian” opened, according to comScore.

Adrian Smith, Sony’s domestic distribution chief, told Variety that the studio was able to overcome downbeat reviews by putting emphasis on “Venom’s” fun factor. “The idea was always to make a film that all audiences could enjoy,” he added.

The fourth iteration of “A Star Is Born,” directed by Bradley Cooper, arrived in theaters amid a wave of positive buzz and an awards campaign that’s gained traction since its debut at the Venice Film Festival on Sept. 5. The release of the soundtrack album on Friday added to the film’s drawing power, according to Warner’s domestic distribution head Jeff Goldstein.

“This is a movie that will be around for months,” Goldstein added. “There’s a lot of room for growth, particularly among younger audiences.”

Paul Dergarabedian, senior media analyst with comScore, credited Sony and Warner Bros. with savvy scheduling and noted that “Venom” is yet another success for Marvel.

“A box office star is born as October sings a glorious tune the likes of which the industry has never heard before for the oft overlooked month, as a perfect harmony of superhero blockbuster and Oscar bound musical create one of the most perfectly orchestrated movie weekends at the multiplex in recent memory,” he added. “And the Marvel brand is just unstoppable.”

The weekend lifted the overall domestic total for 2018 to $9.11 billion as of Sunday, up 9.2% over the same point last year, according to comScore. Universal’s “First Man,” Fox’s “Bad Times at the El Royale” and Sony’s “Goosebumps 2” are the major openers next weekend. Universal’s “Halloween” is expected to do strong business of at least $50 million when it opens on Oct. 19.

Warner Bros.’ second weekend of animated entry “Smallfoot” finished third this weekend with $14.4 million at 4,151 venues, followed by Universal’s second session of Kevin Hart-Tiffany Haddish comedy “Night School” with $12.3 million at 3,019 locations. Amblin-Universal’s “The House With a Clock in Its Walls” finished fifth with $7.3 million in its third weekend for a domestic total of $55.1 million and $87.4 million worldwide.

Lionsgate’s fourth weekend of Anna Kendrick’s comic thriller “A Simple Favor” came in sixth with $3.4 million to take its 24-day domestic total to $49 million. Warner’s fifth weekend of horror-thriller “The Nun” followed in seventh with $2.6 million to push its 31-day take to $113 million.