‘Solo’ Heads to Opening Below Forecasts Over Memorial Day Weekend 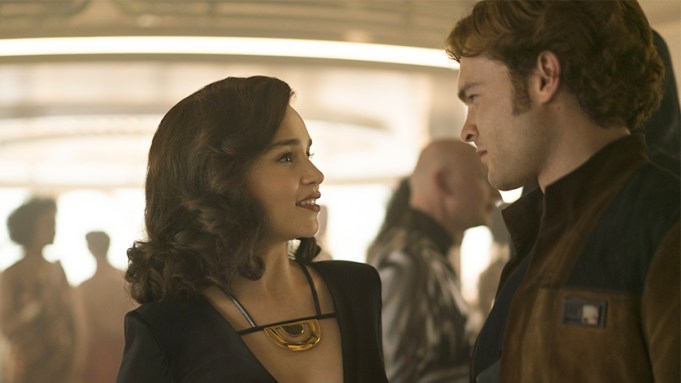 The four-day figure is significantly under the studio’s recent estimates in the $130 million to $150 million range at 4,380 North American locations. First-day grosses are coming in at about $32 million — including $14.1 million from previews, which set a Memorial Day weekend record.

Should the holiday estimate hold for “Solo: A Star Wars Story,” it will raise questions about franchise fatigue and Disney’s strategy of opening the tentpole a mere five months after “Star Wars: The Last Jedi” debuted on Dec. 16. “The Last Jedi” debuted impressively with $220 million in North America, and went on to earn $620 million domestically and $1.3 billion worldwide.

“Solo” is the 10th Star Wars movie and fourth from Disney in less than four years. Critics have been mostly positive with a current 70% “fresh” score on Rotten Tomatoes for “Solo: A Star Wars Story.”

At $110 million, “Solo” would be only the sixth-biggest film to open on Memorial Day weekend. Disney’s 2007 release “Pirates of the Caribbean: At World’s End” currently holds that title with $139.8 million, followed by “Indiana Jones and the Kingdom of Crystal Skull,” “X-Men: The Last Stand,” “Fast and Furious 6,” and “X-Men: Days of Future Past.”

The performance by “Solo,” Disney’s second spinoff from the “Star Wars” franchise, may have also been muted by the strong ongoing attraction from Ryan Reynolds’ “Deadpool 2.” Fox’s superhero spoof is heading for a second weekend in the $55 million range for the four days — which will give the sequel around $220 million for its first 11 days.

Audience reaction to “Solo” from comScore’s PostTrak survey was strong with an 87% total positive score — consisting of a 52% rating of “excellent” and 35% with “very good.” A total of 73% of those surveyed said they would “definitely recommend” the movie.

Disney’s fifth weekend of “Avengers: Infinity War” should remain a draw in third place over the Memorial Day weekend with around $20 million. The Marvel superhero vehicle became the eighth film to top $600 million domestically on May 22.

Paramount’s second weekend of the comedy “Book Club” is pegged for fourth place with around $10 million to $12 million, followed by Melissa McCarthy’s “Life of the Party” at about $6 million.

A trio of films are opening in limited release — IFC’s “Feral,” IFC’s “Mary Shelley” starring Elle Fanning, and A24’s “How to Talk to Girls at Parties.”

“Solo” will represent an improvement on the 2017 Memorial Day weekend, which was led by Disney’s “Pirates of the Caribbean: Dead Men Tell No Tales” launching domestically with $78.5 million, while overall business totaled $181 million.