‘The Predator’ to Prey on Box Office Competition With $25 Million 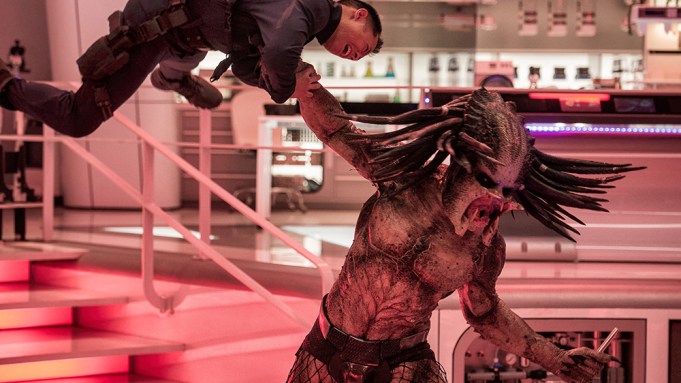 “The Predator” has found its next feast: its box office competitors.

The alien franchise film is coming in at the lower end of expectations, which had ranged from $25 million to $32 million. “The Predator” should be able to top the second weekend of Warner Bros.’ supernatural horror hit “The Nun,” which is projected to finish at about $20 million for a 63% decline.

Lionsgate’s opening of mystery-comedy “A Simple Favor” is heading for a sold third place with $18 million at 3,102 sites, coming in well above forecasts in the $12 million to $15 million range. Sony-Studio 8 crime drama “White Boy Rick” is also projected to top recent forecasts at about $10 million from 2,500 screens, battling for fourth place with the fifth frame of rom-com hit “Crazy Rich Asians” and the second weekend of Jennifer Garner’s thriller “Peppermint.”

Pure Flix is releasing “Unbroken: Path to Redemption,” a faith-based “spiritual sequel” to Angelina Jolie’s 2014 drama “Unbroken,” with the title tracking dismally in the $2.3 million range at 1,525 locations. Jolie is not involved with the pic, directed by Harold Cronk from a script by Richard Friedenberg and Ken Hixon. “Path to Redemption” has a modest price tag of $6 million.

Hurricane Florence, which made landfall Friday morning in North Carolina, will slow down moviegoing this weekend in the Carolinas, Virginia, and Maryland. Additionally, attendance may have been blunted by “The Predator” being at the center of controversy after Fox announced it deleted a scene with Olivia Munn featuring registered sex offender Steven Wilder Striegel. Fox said it was “not aware” of Striegel’s background when he was hired and director Shane Black has apologized for casting his friend.

The new “Predator” follows the titular aliens, who return to Earth, now deadlier than ever before after taking the DNA of other species. Black is directing from a script he co-wrote with Fred Dekker, and John Davis has returned to produce following his involvement with the three previous installments. Along with Munn, the cast also includes Jacob Tremblay, Sterling K. Brown, Boyd Holbrook, Trevante Rhodes, Keegan-Michael Key, Alfie Allen, Thomas Jane, Augusto Aguilera, Jake Busey, and Yvonne Strahovski. Critics have been unimpressed, with a current 33% score on Rotten Tomatoes.

The 1987 original was directed by John McTiernan, and starred Arnold Schwarzenegger, Carl Weathers, and Jesse Ventura as commandos attempting to rescue hostages while being stalked in a Central American jungle by a fearsome extraterrestrial, played by Kevin Peter Hall. The original “Predator” debuted to $12 million on its way to $59 million. “Predator 2” took in $57 million worldwide in 1990 and “Predators” earned $127 million globally in 2010.

“White Boy Rick” stars Richie Merritt as Richard Wershe Jr., who became a drug kingpin and FBI informant in 1980s Detroit before he was 16. Jennifer Jason Leigh, Bruce Dern, Bel Powley, Piper Laurie, and Matthew McConaughey also star. Reviews have been mostly positive for the movie, which debuted at the Toronto Film Festival and has racked up a 63% mark on Rotten Tomatoes.