Box Office: ‘Night School’ to Edge Past ‘Smallfoot’ With $25 Million 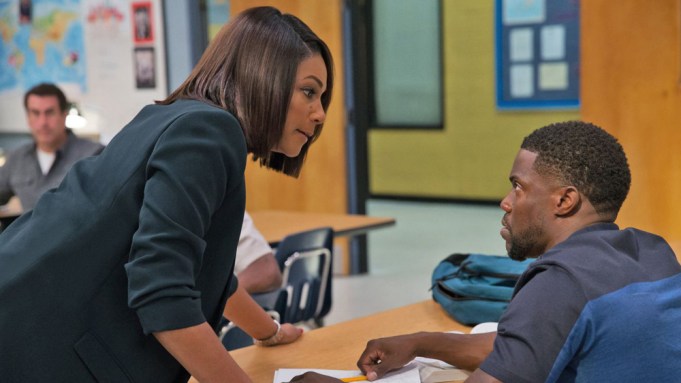 Kevin Hart and Tiffany Haddish’s comedy is headed north of $25 million, according to Friday estimates. The Universal Pictures film picked up about $9 million on Friday, including $1.35 million from Thursday night.

The PG-13 pic is eyeing a debut at 3,000 theaters that’s in line with studio estimates, but on the lower end of initial projections from box office analysts, which had been between $27 million and $35 million.

“Night School,” which cost $29 million to produce, has formidable competition in “Smallfoot.” The animated Warner Bros. release about an adorable Yeti has its sights set on around $22 million from over 4,100 screens. The family film earned about $6 million on Friday (with $850,000 from Thursday previews).

“Smallfoot” has a higher budget of $80 million. The film boasts an impressive voice cast that includes Channing Tatum, James Corden, Common, LeBron James, and Zendaya. Karey Kirkpatrick, known for his work on “James and the Giant Peach,” “Charlotte’s Web,” and “Over the Hedge,” co-wrote and directed the movie.

Jack Black’s “The House With a Clock in Its Walls” should come in third at the box office this weekend. Universal Pictures and Amblin Entertainment’s fantasy film is expected to earn about $14 million after opening last week to $32.3 million — more than a 50% drop in its sophomore frame.

Lionsgate’s “A Simple Favor,” starring Blake Lively and Anna Kendrick, continues to thrill as it heads for north of $7 million, a fourth-place finish.

Lionsgate and CBS Films’ “Hell Fest” is the weekend’s other wide release. The low-budget horror pic about a costumed serial killer is on track to make more than $5 million from 2,200 venues, rounding out the top five.