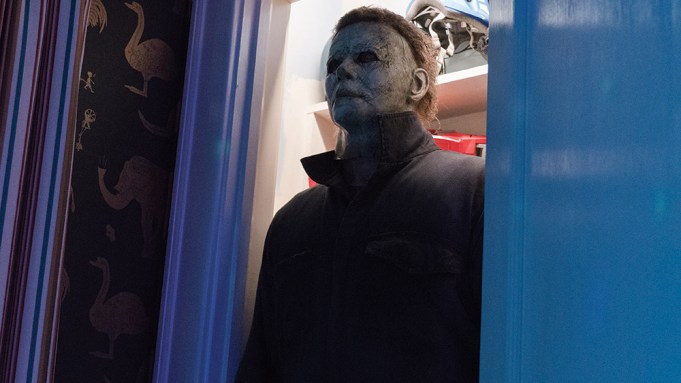 Universal’s R-rated slasher film recorded one of the biggest preview nights for a horror movie. Warner Bros.’ “It” set the record 13 months ago with $13.5 million from 3,500 theaters on Sept 7, 2017.

Anticipation is high among moviegoers for “Halloween,” with Curtis returning as Laurie Strode facing off against serial killer Michael Myers. Universal is forecasting a $50 million bow at 3,928 sites, while some analysts have projected a $70 million launch. “Halloween” is also releasing in 21 international territories this weekend.

“Halloween” will smash the franchise record opening of $26 million set by the 2007 Rob Zombie reboot. “Halloween” will also post one of the best starts for an R-rated horror film, a list headed by “It” ($123 million), “Hannibal” ($58 million), and “The Nun” ($53 million). Given its $10 million production budget, the sequel is on track to be hugely profitable.

The new “Halloween” is the 11th installment in the franchise, five of which included Curtis, and a direct sequel to John Carpenter’s original 1978 movie. Nick Castle returns to portray the deranged Myers, who has escaped custody and heads for Haddonfield, Il., for a final showdown with Strode on Halloween night.

The newest take, produced by Trancas International Films, Blumhouse, and Miramax, has garnered some of the best reviews for a series entry yet. While the last few iterations have been panned, “Halloween” holds a 79% “fresh” rating on Rotten Tomatoes.

Carpenter returned to executive produce and compose the score for “Halloween.” David Gordon Green directs from a script he co-wrote with frequent collaborator Danny McBride and Jeff Fradley.

The third weekends of Sony’s “Venom” and Warner Bros.’ “A Star Is Born” will be battling for second place with both coming in around $15 million to $20 million. Tom Hardy’s “Venom” has taken in $150 million domestically in its first 13 days while Lady Gaga’s “A Star Is Born” has gone past $104 million.

Universal’s second weekend of space epic “First Man,” starring Ryan Gosling, will be in a fight for fourth in the $8 million to $11 range with Sony’s sophomore session of “Goosebumps 2: Haunted Halloween” and Fox’s expanded run of drama “The Hate U Give” to 2,300 locations. “The Hate,” starring Amandla Stenberg, has taken in $2.3 million in two weeks of limited release and pulled in $300,000 on Thursday night from previews at 1,600 locations.

The overall weekend should easily outpace the same 2017 frame, which generated a mild $97.9 million, according to Paul Dergarabedian, senior media analyst with comScore. Year-to-date domestic box office reached $9.36 billion on Oct. 17 for an impressive 9.6% increase over last year.

“It feels like the summer movie season in the middle of fall as Universal’s ‘Halloween’ gets the Blumhouse treatment and is set to slash its way to potentially record-breaking opening weekend numbers as it rides a perfect wave of nostalgia, an irresistible brand, and perfect timing to make the 40-year-old horror franchise more relevant (and lucrative) than ever and push the month of October even closer to a new overall revenue record,” said Dergarabedian.