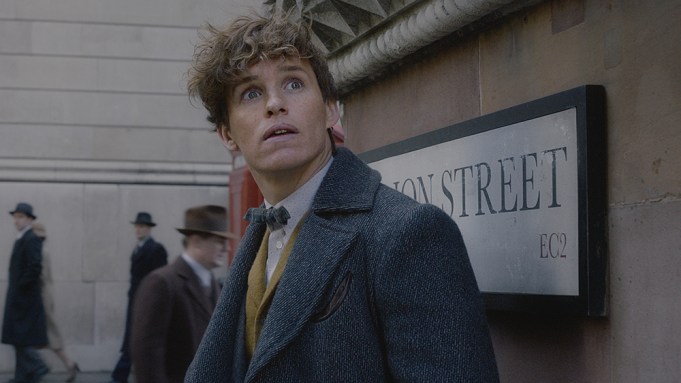 The figure is slightly above the $8.8 million generated from previews for 2016’s “Fantastic Beasts and Where to Find Them.”

“Fantastic Beasts: The Crimes of Grindelwald” has been projected to earn $65 million from 4,163 domestic locations this weekend, though industry estimates show that number could be closer to $75 million and as much as $250 million worldwide. “The Crimes of Grindelwald” is the second entry in what Warner Bros. intends to be a five-film franchise in a prequel series based on the wizarding world popularized by author J.K. Rowling in her seven “Harry Potter” books.

“Fantastic Beasts and Where to Find Them” grossed $814 million worldwide, including $234 million domestically. The eight Harry Potter movies collectively hauled $7.72 billion globally between 2001 and 2011.

Eddie Redmayne returns as magizoologist Newt Scamander, along with Katherine Waterston, Dan Fogler, Alison Sudol, and Johnny Depp as the titular evil wizard Gellert Grindelwald. Jude Law joins the cast as Albus Dumbledore in the days before he was the headmaster of Hogwarts School of Witchcraft and Wizardry.

Internationally, “The Crimes of Grindelwald” took in $31 million on 24,350 screens in 55 markets on Wednesday and Thursday. It will expand to 79 territories and to 46,000 screens this weekend.

Reviews have been mixed, earning the pic a 46% Rotten Tomatoes rating, compared to the first film’s 74%. Variety’s Andrew Barker called the movie “cluttered” and said “magic is in short supply.”

Universal-Illumination’s second weekend of the animated comedy “The Grinch” should be runner-up with around $30 million after topping $85 million domestically in its first six days. Fox’s third frame of “Bohemian Rhapsody” will battle for third place with “Widows” and “Instant Family.”

“Widows” is on track to bring in between $12 million and $18 million from 2,803 theaters. The movie, which carries a $40 million budget, centers on a group of widows who are forced to pay back a crime boss after their husbands are killed in a botched robbery. Viola Davis, Michelle Rodriguez, Elizabeth Debicki, and Cynthia Erivo star in the pic, which premiered at the Toronto Film Festival and has been embraced by critics, with a 92% rating on Rotten Tomatoes.

“Instant Family” is eyeing $15 million to $20 million when it launches in 3,286 venues. The feel-good film stars Mark Wahlberg and Rose Byrne as a married couple who adopt three young children. The comedy is directed by Sean Anders, who teamed with Wahlberg on both “Daddy’s Home” pics. Anders collaborated with John Morris to co-write the script, loosely based on his own experiences. Reviews have been positive with a 70% rating on Rotten Tomatoes.

Overall moviegoing in 2018 has remained on a solid pace heading into the holiday season following record-setting months in February, April, June, and October. As of Nov. 11, total North American grosses for the year had reached $10.15 billion, up 10.2% over the same date in 2017, according to comScore.

“As the countdown to the end of the box office year continues, the three notable newcomers will do their best to grab the attention of audiences who will be torn in many directions by a strong slate of holdovers and their fellow openers in a marketplace that has been rolling along at a record-setting pace and now has just seven weekends left on the calendar,” said Paul Dergarabedian, senior media analyst at comScore.