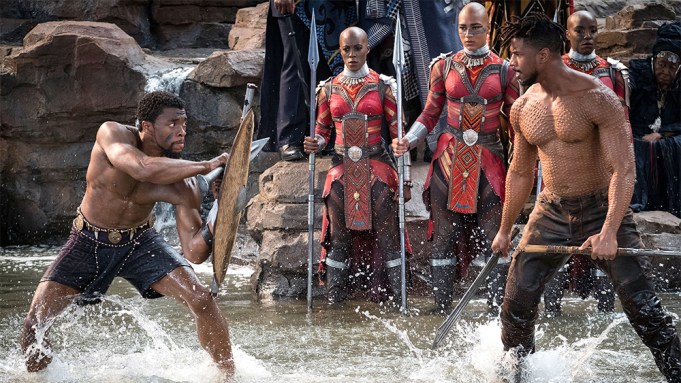 “Marvel’s The Avengers” took in $13.6 million on its first Wednesday in 2012. “Black Panther” has now grossed $277.5 million in its first six days domestically.

“Black Panther” will cross the $500 million mark in worldwide box office on Thursday. Disney will also cross $1 billion in global box office for 2018 to date after just 52 days, thanks to the one-two punch of “Star Wars: The Last Jedi” and “Black Panther.”

“Black Panther” is one of five films that opened with a $200 million domestic weekend (with $202 million), joining “Star Wars: The Force Awakens,” “Star Wars: The Last Jedi,” “Jurassic World,” and “The Avengers.” It’s notched an A+ Cinemascore — becoming only the second Marvel film to do so — and is a must-see cultural phenomenon.

“Black Panther” is heading into its second frame with a strong possibility of becoming the fourth title to top $100 million in a sophomore session domestically. “The Force Awakens” declined 40% to $149 million; “Jurassic World’ slid 49% to $106.6 million; and “The Avengers” fell 50% to $103.1 million.

Directed by Ryan Coogler, “Black Panther” stars Chadwick Boseman, Michael B. Jordan, Letitia Wright, Lupita Nyong’o, Angela Bassett, Danai Gurira, and Daniel Kaluuya. Its success has given the U.S. box office a major lift, with 2018 grosses up 7.3% to $1.64 billion as of Feb. 19, according to comScore.

“Annihilation” is expected to open in the $10 million-$12 million range at more than 2,000 venues. Paramount and Skydance, partners on the movie, sold off international rights to Netflix. Alex Garland directed the tale of a biologist who joins a mission to find out what happened to her husband inside the “Area X” wasteland.

“Every Day,” directed by Michael Sucsy, is the first release from the relaunched Orion Pictures and is heading toward a release of about $3 million at 1,625 locations.