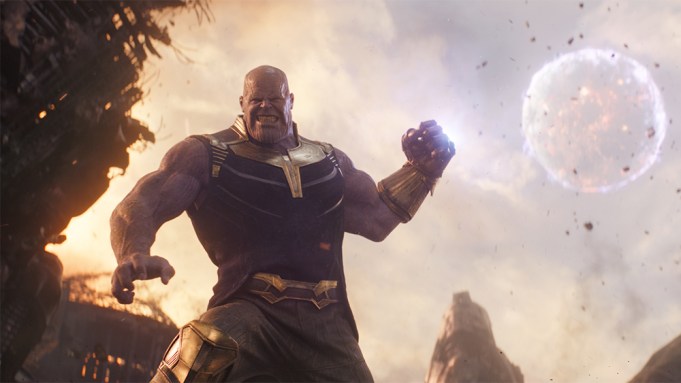 The second weekend of Disney-Marvel’s “Avengers: Infinity War” is heading for $115 million at 4,474 North American sites, while the opening of “Overboard” will take in about $13 million, early estimates showed Friday.

Should the forecasts hold, “Avengers: Infinity War” will follow up its record-breaking debut with the second-highest domestic second weekend of all time behind only “Star Wars: The Force Awakens” at $149.2 million. “Black Panther” currently has the second-highest total at $111.7 million, followed by “Jurassic World” at $106.5 million.

“Avengers: Infinity War” was pegged in the most recent domestic estimates to take in between $25 million and $32 million on Friday, its eighth day in theaters, and between $105 million and $125 million for the weekend. That will give the superhero mashup around $450 million in its first 10 days in North America.

“Infinity War” had the biggest domestic and global launches ever last weekend. In North America, it opened with $258.2 million, while internationally, it secured $382.7 million for a worldwide tally of $640.9 million. “Avengers: Infinity War” is set to join the billion-dollar club globally in record time on Friday or Saturday — its 10th and 11th day of release, respectively. “Star Wars: The Force Awakens” reached that mark in 12 days.

“Overboard,” MGM and Lionsgate-Pantelion’s reboot of the 1987 comedy, is performing in the high end of expectations after forecasts in the $10 million to $13 million range. The film was heading for a solid $4.3 million on Friday — including $675,000 from Thursday night previews — for an estimate in the $13 million to $15 million range at 1,623 sites.

“Overboard” is a gender-swapped remake of the Goldie Hawn and Kurt Russell’s romantic comedy, in which Hawn played a spoiled heiress and Russell portrayed a blue-collar laborer. The new film reverses the roles with Eugenio Derbez as a rich playboy who becomes amnesiac and Anna Faris as a working mother who convinces him that she’s his wife. Rob Greenberg directed from a screenplay he wrote with Bob Fisher and Leslie Dixon.

Paramount’s fifth weekend of John Krasinski’s hit horror-thriller “A Quiet Place” was heading for third place with about $8 million at 3,565 venues to lift its 31-day total to about $160 million. STX’s third weekend weekend of Amy Schumer comedy “I Feel Pretty” looks likely to follow in fourth with about $5 million at 3,440 sites for a total of about $38 million by the end of the weekend.

Focus Features’ launch of drama “Tully,” starring Charlize Theron as a put-upon mother of three who bonds with her new night nanny, was performing in line with estimates of about $4 million from 1,353 locations. Critical response has been enthusiastic, with a current 89% score on Rotten Tomatoes.

“Tully,” New Line’s fourth weekend of Dwayne Johnson’s “Rampage,” and Disney-Marvel’s 11th weekend of “Black Panther” will probably contend for fifth place this weekend. “Rampage” should wind up the weekend with about $85 million in its first 24 days, while “Black Panther” will wind up the frame with about $695 million in 77 days — the third-highest domestic gross of all time after “Star Wars: The Force Awakens” and “Avatar.”

Electric Entertainment’s opening of “Bad Samaritan” appeared to be in line with forecasts of around $2 million at 1,930 locations. Dean Devlin directed the horror film from a script by Brandon Boyce. The thriller, starring David Tennant, Robert Sheehan, and Kerry Condon, follows a poor restaurant valet (Sheehan), who burglarizes the houses of the clientele he services.