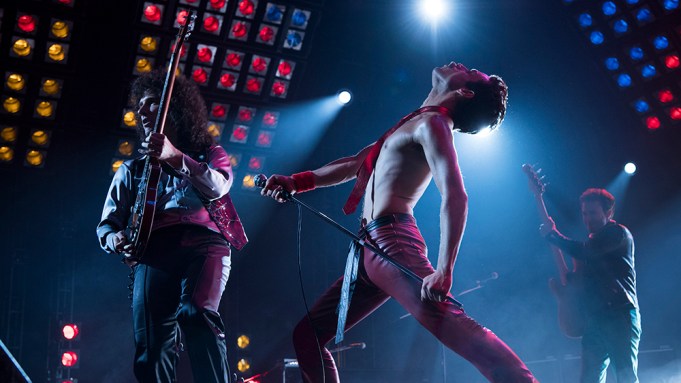 Exit polling showed that 66% of theatergoers rated “Bohemian Rhapsody” as “excellent,” with another 24% calling it “very good.”

The Queen biopic, starring Rami Malek as Freddie Mercury, expands to 4,000 locations on Friday amid expectations that it will easily top the box office with at least $35 million this weekend. Reviews have been critical (the film holds a 60% Rotten Tomatoes score), while praising Malek’s performance as the frontman of the popular rock band during the 1970s and ’80s.

The production of “Bohemian Rhapsody” was temporarily halted last year due to director Bryan Singer’s repeated absences. Singer was fired toward the end of the shoot, though he will still retain sole directing credit, and replaced by Dexter Fletcher. “Rhapsody” is produced by Graham King and New Regency.

Disney’s family-friendly “The Nutcracker and the Four Realms” is due to debut in second place with around $20 million to $25 million at 3,766 venues. The movie, adapted from the ballet classic about a young girl whose Nutcracker doll comes to life, stars Mackenzie Foy, Keira Knightley, Misty Copeland, Helen Mirren, and Morgan Freeman.

Paramount’s Tiffany Haddish comedy “Nobody’s Fool,” directed by Tyler Perry, nabbed $600,000 from Thursday previews. The film has been pegged for a launch of about $15 million at 2,468 sites. Haddish, who broke out in last year’s “Girls Trip,” plays a recently paroled wild child who helps her sister (portrayed by Tika Sumpter) get revenge on a man who catfished her.

Universal’s third weekend of “Halloween” remains a player in the post-Halloween frame and should bring in around $15 million. The scarefest, starring Jamie Lee Curtis, has been a smash, earning $137 million domestically in its first 13 days.

Paul Dergarabedian, senior media analyst with comScore, noted that the weekend will trail the same 2017 frame when Disney-Marvel’s “Thor: Ragnarok” hammered out a massive $122.8 million debut. “Three very different wide-release newcomers will do their best to nonetheless rock audiences at the multiplex while the industry enjoys an impressive 11% year-to-date box office advantage,” he added.