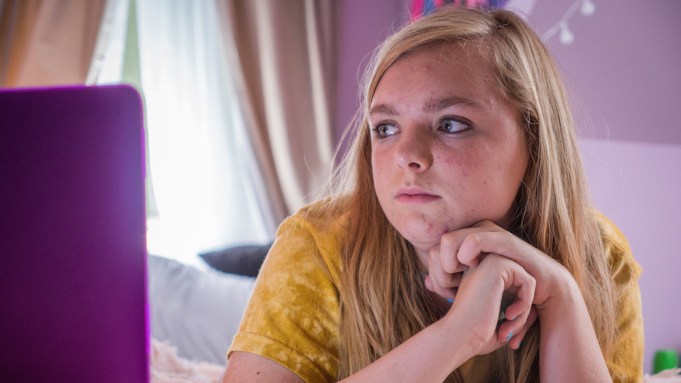 Middle school isn’t a shining time for anyone, but today’s pressures of social media and a whole online community outside of the classroom have added another layer of difficulty.

That’s the premise of “Eighth Grade,” written and directed by stand-up comedian Bo Burnham. In the clip, star Elsie Fisher has her own YouTube channel, where she tells her followers, “the topic of today’s video is being yourself. Being yourself can be hard, and it’s like ‘Aren’t I always being myself?’ And yeah, for sure, but being yourself is like not changing yourself to impress someone else.” And then signs off with an enthusiastic farewell and her character Kayla’s signature line, “Gucci!”

But as she preaches her messages of self love on her public platform, Kayla struggles with her own anxiety and the pressures to be perfect. Whether snapping  filtered pictures of herself on Instagram, refreshing her social media feeds or simply talking to her father the pressures of eighth grade are all consuming for this young student.

“I’m really nervous all the time,” Kayla admits, afraid to swim with her classmates at a pool party. “I try really hard not to feel that way but you just have to face your fears and let people know the real you.”

The film, the first by Burnham, debuted at the Sundance Film Festival and also stars Josh Hamilton and Emily Robinson.