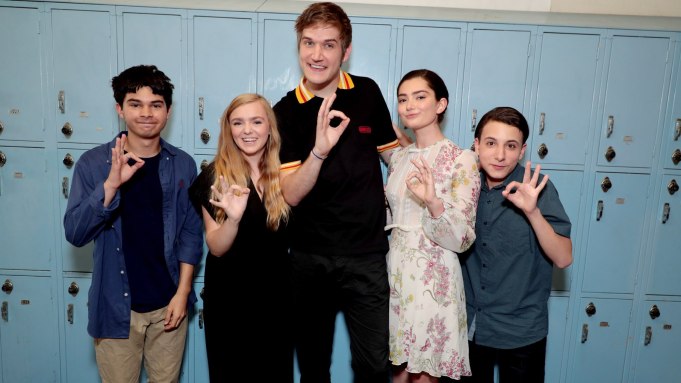 As Elsie Fisher, the star of Bo Burnham‘s directorial debut film “Eighth Grade,” flatly stated: “Eighth grade for me sucked, but whatever.” Middle school, and indeed eighth grade in particular, is not exactly “Gucci” to say the least. But for a special screening in Los Angeles Wednesday night, A24 took guests on a trip down memory lane in the Joseph Le Conte Middle School auditorium–lack of AC and all.

“Being sweaty and a little uncomfortable is very on-brand for our movie,” Burnham joked before the screening started.

The universally-lauded film, which follows Fisher’s Kayla during her last week of middle school, was a story distinctly separate from Burnham’s own experience. “Being a 13-year-old girl sort of insulated me from projecting my own experience. I didn’t want to make a nostalgic story or a memory. I wanted it to be sort of visceral and current,” he said.

But he conceded that he does relate more to the character at this stage of his life: “I feel much more like her now dealing with anxiety and trying to come to grips with that.”

For her part, Fisher, who graduated eighth grade, shot the film a week later, and headed back to high school a week after the shoot wrapped, didn’t view tapping into the character as work–even down to the “stumbly” lines of dialogue.

“I mean, Kayla and I are very similar. I really related to this portrayal of teen anxiety. Kind of in the same way Kayla is, I wasn’t bullied. I was more, like, ignored. And because I’m socially anxious, I channeled that into being weird. So, I’d opt out,” she shared with Variety.

Fisher hopes other eighth graders can “maybe feel less weird and anxious” after seeing the film.

As for why Burnham chose eighth grade in particular to focus on, “there are a lot of high school movies and not a lot of middle school movies,” he said. “By the time kids get to high school, I think they’re a little bit blasé and over it or have a 1,000 yard stare from the war of middle school. So, I was interested in [eighth grade] because you really are still a child. You’re trying to become an adult, but you’re really a child. Your body’s exploding and your mind is mashed potatoes. It’s crazy.”

Fisher added, “I feel like kids are starting to have adult bodies and feelings, but they’re still very much not mature. And I think that contrast is a lot to deal with at an age where you start becoming self-aware and that leads you to worrying about your sense of identity.”

Producer on “Eighth Grade” Chris Storer, who is a frequent collaborator of Burnham’s, wants kids to realize that, “they’re not alone and everyone has the same anxieties they do. I think I would have felt better hearing that as a kid.”

When Burnham began writing the first few drafts of the script in 2014, he immediately knew it was a project he wanted to direct. “I wrote it to direct it,” he told Variety. “I tried to write a story I felt played to my strengths, which were young people and the Internet.”

As he shared in a post-screening Q&A alongside his stars Fisher, Emily Robinson (Olivia), Daniel Zolghadri (Riley), and Jake Ryan (Gabe), “I feel like a nervous kid on the Internet and I feel like an out-of-touch old dude that has no idea what she’s going through.”

Burnham hopes that the hyper-realistic story resonates not only with middle school viewers, but with all ages, ultimately.

“I hope everyone can just see themselves in Kayla and identify with her. Why can’t an epic story about the human condition be about a 13-year-old girl walking into a pool party and not just some dude with a sword?”

After the screening, the evening continued with a full-on middle school dance in the gymnasium, with a DJ blasting “Mambo No. 5” as partygoers like Dylan O’Brien and Alia Shawkat grabbed some punch.

Guests were also welcome to a slew of food trucks in the basketball courtyard outside including The Grilled Cheese Truck, Astro Doughnuts & Fried Chicken, and King Kone in between trying their hand at karaoke and carnival games.

Any #EighthGrade dance would have been infinitely cooler with food trucks 🌭🍕🍦🍩 pic.twitter.com/8AWZL2h79T