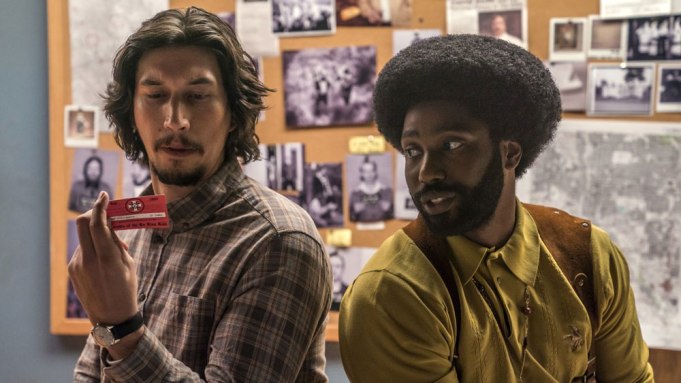 The clip opens with John David Washington’s Ron Stallworth arriving for his new job in law enforcement, where he has been assigned to take down the Ku Klux Klan. Using an unexpected strategy, he decides to call the head of the KKK on his first day.

“Since you asked, I hate blacks. I hate Jews, Mexicans and Irish, Italians and Chinese,” he tells the KKK leader over the phone, as the rest of the office eavesdrops in dumbfounded amazement. “But my mouth to God’s ears, I really hate those black brats. And anyone else, really, that doesn’t have pure white Aryan blood running through their veins.”

“BlacKkKlansman,” directed by Lee, is based on the true story of Stallworth, a Colorado Springs black police officer who went undercover and successfully infiltrated a Ku Klux Klan chapter. Stallworth detailed his experience in his 2014 novel “Black Klansman.”

Washington (“Ballers”) takes on the role of Detective Stallworth, while Adam Driver plays his partner Flip Zimmerman, who pretends to be Stallworth after he makes contact with the KKK. Stallworth and Zimmerman work to impede the KKK’s efforts to control the city.

“You’re Jewish. They hate you. Doesn’t that piss you off?” Ron replies. “Why are you acting like you ain’t got skin in the game?”

Also starring in the film are “Spider-Man Homecoming’s” Laura Harrier and Topher Grace, who will be portraying former KKK leader David Duke.