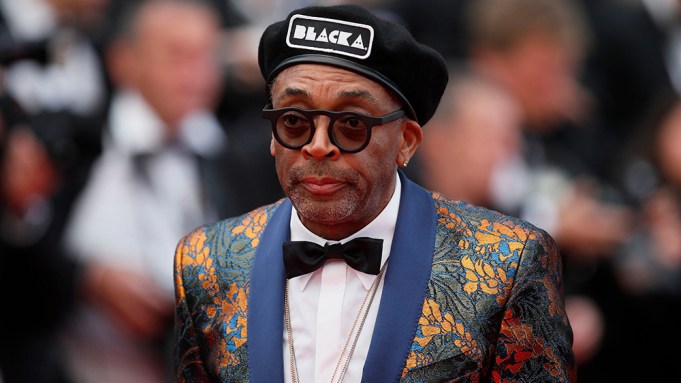 Director Spike Lee received a six-minute standing ovation at the Cannes Film Festival after the Monday night premiere of his new drama “BlacKkKlansman.”

The movie, which tells the true story of an undercover African-American detective (John David Washington) and his Jewish partner (Adam Driver) who team up to infiltrate Klu Klux Klan in 1979, is incredibly timely. It even ends with footage of Donald Trump refusing to condemn the actions of white nationalists during the deadly 2017 Charlottesville riot. There are a lot of digs at the current president throughout “BlacKkKlansman” — one KKK member talks about embracing an “America first” policy and the film makes parallels between the rise of Trump and the political ambitions of former Grand Wizard David Duke (played with wide-eyed malevolence by “That ’70s Show’s” Topher Grace).

Lee walked the red carpet wearing brass knuckles from “Do the Right Thing,” which said “love” on one hand and “hate” on the other. He was joined by cast members Washington, Driver, Grace, Damaris Lewis, Jasper Paakkonen, Laura Harrier, and Corey Hawkins.

Formal reviews have yet to hit, but critics were quick to declare “BlacKkKlansman” to be Lee’s best movie in years. IndieWire’s Eric Kohn called it “electric” while the AP’s Jack Coyle labeled it “Spike to the max.”

It’s been a slow Cannes, but “BlacKkKlansman” seems to be one of few breakout discoveries as the festival stumbles into its second week. Lee will surely be a strong contender for the Cannes best-director prize and he may even bag the Palme d’Or, the festival’s top honor. If he does, it would be retribution after “Do the Right Thing” was infamously passed over for the award when it screened at the 1989 edition of Cannes.

Many members of the Cannes jury — including Cate Blanchett, Ava DuVernay, and Kristen Stewart — all walked the red carpet before the film. Christopher Nolan, who is in Cannes this year presenting a restored version of “2001: A Space Odyssey,” was also in attendance.

Focus Features also released the trailer on Monday, in conjunction with the premiere. In it, Washington and Driver’s characters team up to begin their infiltration of the KKK.

“BlacKkKlansman” opens on Aug. 10, which is roughly a year after the Charlottesville riots left three people dead and 38 injured.