‘Black Panther’ Reviews: What the Critics Are Saying 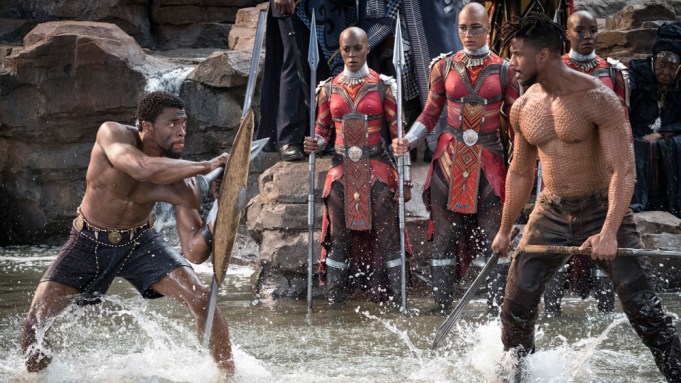 Early reviews are in for Marvel’s “Black Panther,” and many critics are celebrating the diversity the superhero film brings to the comics universe.

Directed by Ryan Coogler and starring Chadwick Boseman, Michael B. Jordan, Lupita Nyong’o, Forest Whitaker, Angela Bassett, Danai Gurira, and Letitia Wright, the film is the first of its kind — a Marvel film led by a black director and a primarily black cast. Critics pointed out the importance of this diversity in today’s culture,  particularly the film’s majestic portrayal of Africa following Donald Trump’s recent “s-hole” comments.

In his review for Variety, Peter Debruge noted how this diversity is not only racially inclusive, but representative of women and the LGBTQ community as well.

“While far more mainstream — and by extension, kid-friendly — than such blaxploitation classics as ‘Foxy Brown’ and ‘Cleopatra Jones,’ ‘Black Panther’ upholds the same tradition of celebrating strong, assertive black women,” he wrote. “At the end of a big rhinoceros battle, a male character submits to Gurira in the film’s single most iconic shot, while an earlier scene in which she tosses aside a bad wig ranks as the most gay-friendly Marvel moment to date.”

Reviews also praised Jordan’s portrayal as the villain, with some saying his evil performance is among the best the Marvel universe has ever seen.

“Coogler makes good on the landmark project’s potential by featuring a predominantly black ensemble, casting some of the best young actors around — from Chadwick Boseman (who proved his dramatic chops playing James Brown, Jackie Robinson, and Thurgood Marshall in recent years) to Michael B. Jordan (even more buff, and twice as charismatic, than he appeared in the director’s two previous features, ‘Fruitvale Station’ and ‘Creed’) — as well as such legends as Forest Whitaker and Angela Bassett. But historical significance aside, what superhero fans want to know is how ‘Black Panther’ compares with other Marvel movies. Simply put, it not only holds its own, but improves on the formula in several key respects, from a politically engaged villain to an emotionally grounded final showdown.”

“Chadwick Boseman follows up a memorable ‘Captain America: Civil War’ appearance as African ruler T’Challa (and his masked warrior alter ego) with a roaring solo adventure that unleashes James Bond-style spycraft, geopolitics galore and tribal intrigue a la ‘Game of Thrones.’ Yet while there are plenty of fantastical aspects, Black Panther is extremely grounded, dealing with the consequences of ages-old colonialism and exploring isolationism at a time when actual countries are building borders rather than breaking them down.”

“A jolt of a movie, ‘Black Panther’ creates wonder with great flair and feeling partly through something Hollywood rarely dreams of anymore: myth. Most big studio fantasies take you out for a joy ride only to hit the same exhausted story and franchise-expanding beats. Not this one. Its axis point is the fantastical nation of Wakanda, an African Eden where verdant-green landscapes meet blue-sky science fiction. There, spaceships with undercarriages resembling tribal masks soar over majestic waterfalls, touching down in a story that has far more going for it than branding.”

“Coogler’s filmmaking isn’t flawless. The CG backdrops veer into screensaver territory, and the battle scenes are often shot in turbulent closeup; the last 30 minutes are so frenetic it feels like there are defibrillator pads sewn into the theater seats. But he infuses nearly every frame with soul and style, and makes the radical case that a comic-book movie can actually have something meaningful — beyond ‘boom’ or ‘kapow’ or ‘America’ — to say. In that context, ‘Panther’s’ nuanced celebration of pride and identity and personal responsibility doesn’t just feel like a fresh direction for the genre, it’s the movie’s own true superpower.”

“It is remarkable how Coogler (who also wrote the script with Joe Robert Cole) has been able to give all these many characters, and others, their own story arc and weave them all together in masterful fashion. He fully meets the promise he showed in both smaller personal films like ‘Fruitvale Station’ and a larger canvas like ‘Creed.’ He is helped here enormously by a terrific production crew, with many key jobs filled by women including ‘Mudbound’ cinematographer Rachel Morrison, the first female to be nominated for a best cinematography Oscar; the colorful costumes of Ruth Carter; great production design from Hannah Beachler; and generally fine work right on down the line including an awesome visual effects team. This is about as diverse a massive studio production of this scope that Hollywood has ever seen, both in front and behind the camera.”

“Thrillingly and thoughtfully directed and written (with Joe Robert Cole) by Ryan Coogler, the film lights up the screen with a full-throttle blast of action and fun. That’s to be expected. But what sneaks up and floors you is the film’s racial conscience and profound, astonishing beauty. Not just a correction for years of diversity neglect, it’s a big0budget blockbuster that digs into the roots of blackness itself. Coogler, 31, has proved his skills behind the camera with ‘Fruitvale Station’ and ‘Creed,’ but in ‘Black Panther’ he journeys into the heart of Africa to bring a new world to the screen. The result feels revolutionary.”

“‘I have seen gods fly. I have seen men build weapons that I couldn’t even imagine. I have seen aliens drop from the sky. But I have never seen anything like this.’ So mutters astonished C.I.A. agent Everett K. Ross (Martin Freeman) as he first sets eyes on the shrouded African country of Wakanda, a veritable El Dorado that mined a meteorite’s worth of vibranium to become the most technologically advanced nation on Earth, and the host country for the best Marvel movie so far, by far. He speaks for us all. Nobody has ever seen anything like ‘Black Panther’ — not just an entire civilization built from the metal stuff inside Captain America’s shield, and not even just a massive superhero movie populated almost entirely by black people, but also a Marvel film that actually feels like it takes place in the real world.”

“More than most superhero flicks, Black Panther feels like an ensemble piece – as if any character in this story might be the lead of their own, if only the film would shift its perspective a bit. Even the superhero’s mother (Ramonda, played by Angela Bassett) gets a chance to shine. (Every other superhero’s dead mom must be so jealous.) This generosity extends even to its big bad, Killmonger (Michael B. Jordan). Black Panthermarks maybe the third time in the entire 18-film MCU franchise that the villain has felt like anything approaching a real person, and Killmonger’s arc is surprisingly moving – he’s a man whose ache for a home he never knew has long since festered into resentment and rage.”

“To describe ‘Black Panther’ as a black superhero film doesn’t do enough to praise how utterly disinterested it is in appealing to a white audience. At its core, Coogler’s film feels like a love letter to every black person who will step into the movie theater to see it, be they be of American or African descent. It is a film that honors the history of black bodies on our entire continent, from the kingdoms they built, to the bondage they were shackled in, to the world that has treated them with cruelty at every possible turn.”