‘Black Panther’ Could Make as Much as $200 Million in Massive U.S. Debut 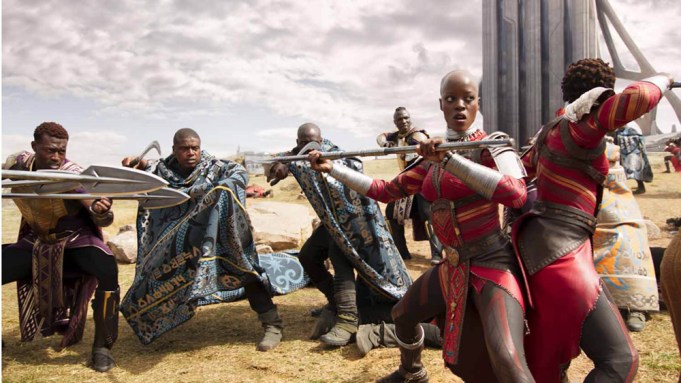 Disney-Marvel’s “Black Panther” is poised to shatter box office records for February, with updated forecasts from Disney in the $172 million-$198 million range in North America during the four-day Presidents Day weekend.

That’s significantly above the first tracking on Jan. 25 for the tentpole, which initially placed the debut in the $100 million-$120 million range for the Feb. 16-19 period. The projections are higher even than tracking estimates earlier this week showing the film would make as much as $170 million.

“Black Panther” should easily break the Presidents Day weekend record of $152 million, set in 2016 by “Deadpool.” The second-highest debut for the four-day holiday was for “Fifty Shades of Grey,” which opened in 2015 to $93 million.

The latest Marvel entry dominated in Thursday preview showings, earning a muscular $25.2 million. The Thursday opening numbers represent a new high-water mark for the month of February. They are roughly double the previous record of $12.7 million, which was set by “Deadpool.” It also ranks as the second-biggest preview gross for a Marvel title, behind only “Avengers: Age of Ultron,” which scored $27.6 million from its previews.

Screenings started Tuesday in a trio of international markets in the U.K., Hong Kong, and Taiwan, followed by Wednesday launches in France, Italy, Korea, Belgium, Netherlands, Norway, Sweden, Malaysia, Philippines, Singapore, Thailand, and Indonesia. Most other markets will be open this weekend, followed by Russia on Feb. 22, Japan on March 1, and China on March 9.

The superhero tentpole, starring Chadwick Boseman, will play in more than 4,000 North American theaters, including 3,300 3D locations and more than 400 Imax screens.

The film has captured the zeitgeist, setting records for advanced ticket sales. Fandango on Thursday said the picture had become the fourth-highest selling pre-seller in its history, behind “Star Wars: The Force Awakens,” “Star Wars: The Last Jedi,” and “Rogue One: A Star Wars Story.” Fandango also reports it accounted for 36% of opening night sales for “Black Panther.”

A Fandango survey found that 61% are considering repeat viewings of “Black Panther,” which could bode well for the film’s box office performance in the coming weeks.

Around the country, civic groups have organized fundraisers to pack theaters with children to see the film. The #BlackPantherChallenge is among the number of grassroots efforts by people across the country to support the film, and ensure children see the picture.

It’s a film of many firsts: “Black Panther’s” protagonist T’Challa (Boseman), the king of a secret African nation, is the first black character to lead a Marvel Cinematic Universe movie, while Ryan Coogler is the first black director of a Marvel film. The large cast of black actors includes Michael B. Jordan, Lupita Nyong’o, Danai Gurira, and Forest Whitaker.

“Black Panther” hits theaters at a time when most major movies are still being anchored by white male stars. According to a study by the USC Annenberg School for Communication and Journalism, of the 100 highest-grossing films of 2016, roughly a quarter lacked any black characters.