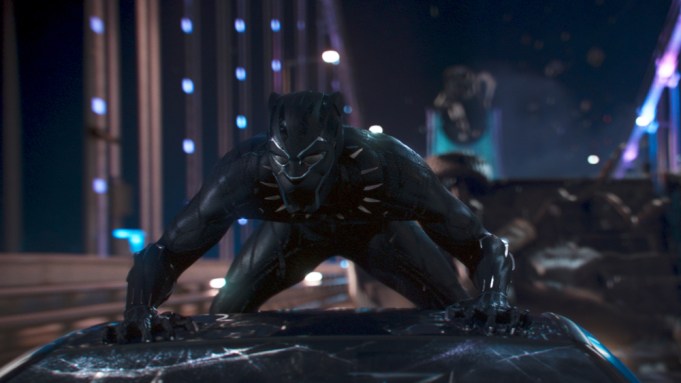 Kevin Feige, the president of Marvel Studios, first realized that “Black Panther” was more than just movie when the trailer debuted at Cinemacon last year to tears and cheers. It suddenly dawned on him that “we were doing something that people had been waiting their entire lives to see,” says Feige, who always looked up to onscreen heroes such as Luke Skywalker. “That was something that a white male that grew up in the United States can take for granted. And you don’t take that for granted anymore. Everyone deserves to see themselves reflected on that silver screen and the inspiration that comes from it.”

“Black Panther” is set to shatter box office records as the first comic-book tentpole with a primarily black cast (starring Chadwick Boseman as the title character) and director (Ryan Coogler). For a cover story ahead of the film’s release, Feige spoke to Variety about the latest Marvel movie.

Wesley Snipes had been trying to make a Black Panther movie in the early ’90s. What took so long?
I don’t know. This is the 10-year anniversary of Marvel Studios, starting with “Iron Man.” I’ll speak starting in 2008. For us, we were building the Avengers. That took up the first five years. And as audiences continued to come, we got to tell more of these stories and we got to a point where we were developing “Captain America: Civil War.” We had an opportunity to introduce a character that had no allegiance to either Iron Man or Captain America and that clearly was Black Panther, who has his own agenda, agency, country, and culture. And he found himself thrust into the world of the Avengers. That became, for us, lighting the wick on the beginning of bringing Panther to the world and casting Chadwick and soon after that, hiring Ryan Coogler. I’m very glad this movie wasn’t made in 1992 because Ryan Coogler might not have been born.

Did you always know there would be a Black Panther movie?
We always knew we wanted to do it someday. We always knew it was the manifest destiny of Marvel Studios to bring to life all facets of the Marvel universe. At the end of “Iron Man 2,” when Nick Fury is discussing for the first time the Avengers initiative with Tony Stark, he’s brought him to this secret shield warehouse. One of the maps prominently displayed is a map of Africa with a little pinpoint to where Wakanda is. In “Avengers: Age of Ultron,” we talked about Vibranium for the first time and Bruce Banner mispronounces Wakanda. We’ve been feeding it through the films, knowing if we had the opportunity to keep making films, Panther was high on the list. It was his inclusion in “Civil War” that sped it up.

How exactly did that happen?
We were working on the story and we needed another character. Our executive producer suggested T’Challa. The minute we started talking about Black Panther, we brought up Chadwick. He really was the only actor we discussed. We had seen the Jackie Robinson role [in “42”] and “Get On Up” was coming up. We were very impressed by how different James Brown and Jackie Robinson are, and how he could sort of do anything. I think it was 24 hours between saying his name in a creative story meeting and talking to his agent and getting on a phone with him and offering him the role of Black Panther, which he accepted. He was in Zurich on a press tour for “Get On Up,” which makes the story even more far-flung and global and James Bond-like.

How many more Black Panther films will there be?
We always say we work on one movie at a time. If you have any good ideas, put it in the movie you’re making. If you don’t, you might not be able to make another one. That said, Panther has been around for more than half a century in the comic books and there are many, many stories to tell.

Do you think Ryan Coogler will come back to direct a sequel?
I hope so.

Do you want him to come back?
Absolutely.