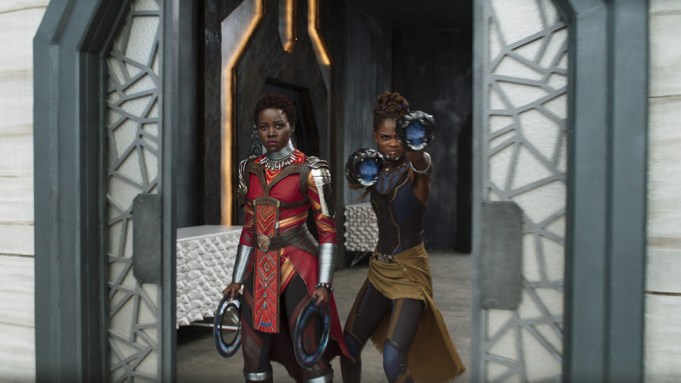 Disney-Marvel’s “Black Panther” is heading for a sensational second weekend of about $90 million at 4,020 North American sites, early estimates showed on Friday.

The super-charged tentpole was projected to take in about $25 million on Friday, its eighth day of release, in a dominant performance that would place it in the $85 million to $90 million range. It would be the fifth-highest-grossing domestic second weekend of all time, trailing only “Star Wars: The Force Awakens” at $149 million, “Jurassic World” at $106.6 million, “The Avengers” at $103 million, and “Beauty and the Beast” at $90.4 million.

Marvel-Disney’s 2015 sequel “Avengers: Age of Ultron” is currently fifth on the second-weekend list with $77.7 million.

“Black Panther” has already hauled $292 million domestically in its first week, trailing only “The Force Awakens,” “The Last Jedi,” and “Jurassic World” on that measure. If forecasts hold, the Chadwick Boseman-starrer will have grossed around $380 million in its first 10 days — a level reached by only 32 other films — and will have enough momentum to become the 10th film to hit the $500 million domestic mark.

Disney noted on Friday morning that Marvel comparative titles have declined on average of 53% domestically, with the exception of “The Avengers,” which only dropped 45%. Applying those drop-offs to “Black Panther,” which debuted with a $176 million Friday-Sunday take (without Thursday night previews), would indicate a second weekend somewhere in the $83 million to $95 million range.

New Line’s opening of R-rated comedy “Game Night” will lead the rest of the pack with about $15 million at 3,488 locations. “Game Night,” starring Jason Bateman and Rachel McAdams, has been tracking in the $12 million to $14 million range recently.

The film is directed by John Francis Daley and Jonathan Goldstein, and follows Bateman and McAdams as couple whose regular game night suddenly turns into a murder mystery. Critics have given “Game Night” strong support, helping draw an 82% “fresh” rating on Rotten Tomatoes.

Sony’s third frame of the family comedy “Peter Rabbit” looks likely to finish third with about $11 million at 3,725 venues, giving the CGI-live action title about $70 million by the end of the weekend.

Paramount’s opening of science-fiction thriller “Annihilation” should wind up in fourth with about $10 million at 2,012 locations at the lower end of expectations. The Natalie Portman vehicle has been embraced by critics, earning an 88% rating on Rotten Tomatoes.

Orion’s low-cost romancer “Every Day” is pegged for $3 million to $4 million at 1,625 venues in its opening weekend. Directed by Michael Sucsy, “Every Day” is the first release from MGM’s relaunched Orion Pictures and is employing a model in the vein of Blumhouse Tilt, with modestly budgeted and targeted releases.