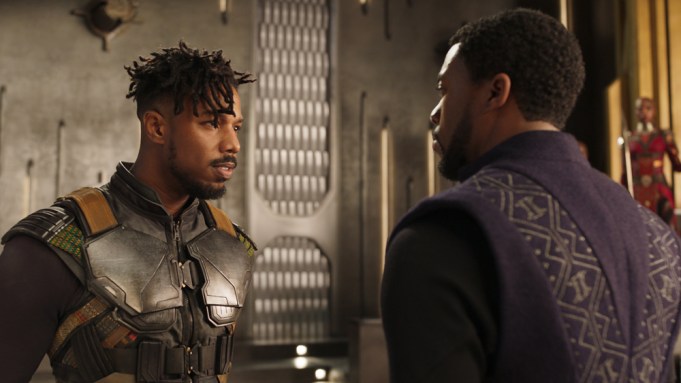 Disney-Marvel’s “Black Panther” is re-writing the record books, topping “Star Wars: The Last Jedi” for the second-highest four-day domestic opening of all time, with $242 million at 4,020 North American locations.

The superhero pic set a record for top Monday domestic gross ever, with $40.2 million, edging the previous high set by “Star Wars: The Force Awakens” at $40.1 million. The Monday total came in $7 million above the studio’s projections and lifted the four-day haul to $242 million.

“Black Panther” has grossed the second-highest four-day total of all time, behind only “Star Wars: The Force Awakens” at $288.1 million and $400,000 ahead of “Star Wars: The Last Jedi.”

Disney also reported Tuesday that the international total has reached $184.6 million to lift the worldwide take to $426.6 million, led by South Korea at $27.1 million and the U.K. at $26.7 million.

The tentpole, starring Chadwick Boseman and directed by Ryan Coogler, has blown past its original tracking. The film, which carries an estimated $200 million production budget, had been tracking to bring in between an impressive $100 and $120 million when first projections emerged on Jan. 25.

Since then, “Black Panther” has become a must-see event as it’s veered into record-setting territory and has continued to shatter all projections since then. It has the highest three-day debut ever for a February film and the fifth-biggest of all time behind only “Star Wars: The Force Awakens” at $248 million, “Star Wars: The Last Jedi” at $220 million, “Jurassic World” at $208.8 million, and “The Avengers” at $207.4 million.

“Black Panther” has demolished the record for the largest Presidents Day weekend, blowing past “Deadpool’s” 2016 mark of $152 million.