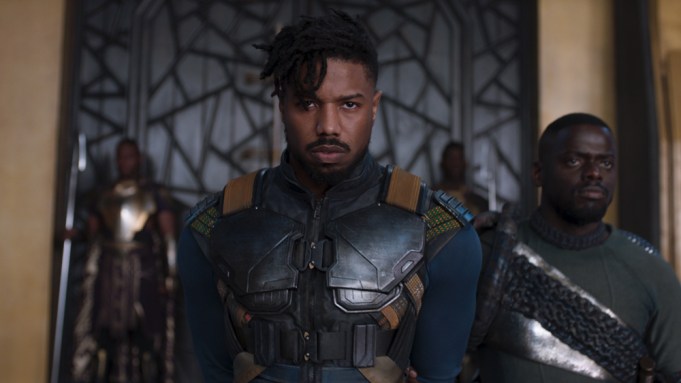 “Black Panther,” starring Chadwick Boseman and directed by Ryan Coogler, has blown away its original tracking in less than a month. The film, which carries an estimated $200 million production cost, had been tracking to bring in between an impressive $100 and $120 million when first estimates emerged on Jan. 25.

Since then, “Black Panther” has become far more than just a popular tentpole title. Instead, it’s become a must-see event as it veers into record-setting territory. Thursday previews brought in $25.2 million, the largest Thursday night preview gross for a February opener and the second-largest preview gross for a Marvel film. The film has continued to shatter all projections since then.

On Sunday, Disney estimated that “Black Panther” would take in $218 million for Presidents Day weekend, then revised that number upward on Monday morning by an astounding $17 million. The movie finished Sunday with a $60.1 million — the second best Sunday in industry history, just slightly behind 2015’s “Star Wars: The Force Awakens” record of $60.6 million.

With 73% of schools closed, “Black Panther” business should decline 45% from Sunday for a $33 million Monday and $235 million four-day debut.

“Black Panther” has demolished the record for the largest President’s Day weekend, blowing past “Deadpool’s” 2016 mark of $152 million. Overall North American moviegoing for the four-day period should hit an eye-popping $340 million — far above the $278 million mark in 2016, according to comScore.

“Black Panther” should dominate moviegoing for several weeks. Three new films launch next weekend with initial tracking on Feb. 1 showing Warner Bros.’ comedy “Game Night” was projecting an opening in the $15 million to $20 million range on Feb. 23-25, while Paramount’s sci-fi thriller “Annihilation” debuting in the $12 million to $15 million area during the same weekend.

Sony’s ninth weekend of its action-comedy “Jumanji: Welcome to Jungle” finished fourth with $10 million at 2,800 venues. The 62-day domestic total has hit $380 million, just behind 2005’s “Star Wars: Episode III — Revenge of the Sith” for 32nd spot on the all-time list. “Jumanji” declined only 21% from the eighth weekend and its ninth weekend is the ninth highest of all time.

Fox Searchlight’s 12th weekend of “The Shape of Water” came in 12th place with $2.1 million at 957 locations for an 81-day total of $53.7 million. The Guillermo del Toro fantasy romance scored a leading 13 Academy Award nominations on Jan. 23.