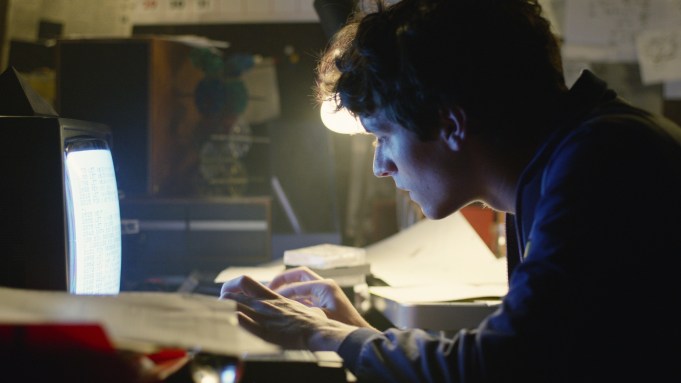 The next installment of Charlie Brooker’s “Black Mirror” mind-bending tech-dystopia franchise hits Netflix this Friday with a special interactive movie.

The streamer released the trailer for “Black Mirror: Bandersnatch” (watch above or at this link), which premieres Friday, Dec. 28, on Netflix worldwide. It’s expected to be a choose-your-own-adventure style movie, with reports that “Bandersnatch” includes 312 minutes of material (just over five hours) to explore.

According to Netflix’s description of the special, “Black Mirror: Bandersnatch” is set in 1984, when a young programmer (Fionn Whitehead) begins to question reality as he adapts a sprawling fantasy novel called “Bandersnatch” — written by a mad genius who allegedly cut off his wife’s head — into an adventure video game. Our code-jockey hero soon faces “a mind-mangling challenge.”

A “bandersnatch” is a ferocious creature with snapping jaws that appears in Lewis Carroll’s fantasy classic “Through the Looking-Glass” and his 1874 poem “The Hunting of the Snark.”

Earlier this year, Netflix announced the renewal of “Black Mirror” for a fifth season, with additional details yet to be announced. The first two seasons of the sci-fi anthology series aired on the Britain’s Channel 4, before Netflix licensed both seasons and then picked it up for third and fourth seasons. The critically acclaimed series won two 2017 Emmy Awards for the season-three episode “San Junipero” and season four’s Star Trek-inspired “USS Callister” segment scored four Emmys this year.

The series was created and written by Brooker, who executive produces alongside Annabel Jones. “Black Mirror” is produced by Endemol Shine U.K.’s House of Tomorrow.