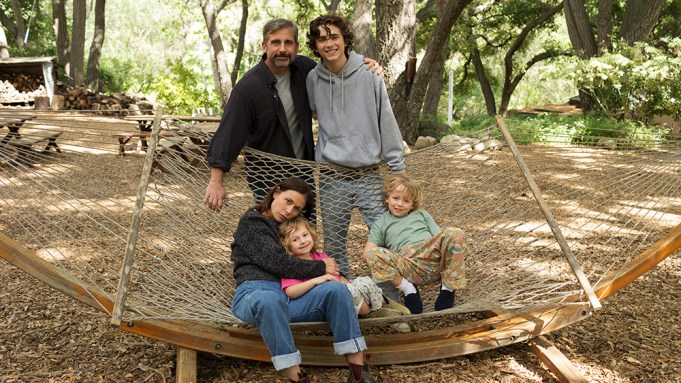 Chalamet stars as Nic Sheff, a young man who struggles with drug addiction, and Carell as his father, David Sheff. The film also stars Amy Ryan and Maura Tierney. It’s based on David Sheff’s book “Beautiful Boy: A Father’s Journey Through His Son’s Addiction,” as well as Nic Sheff’s “Tweak: Growing Up on Methamphetamines,” about Nic Sheff’s drug addiction and its impact on his family.

“The film is making a strong connection to the audience with its highly praised performances and portrayal of a family fighting to save their son,” said Bob Berney, head of marketing and distribution for Amazon Studios. “In addition, it’s reaching both younger and older audiences and initiating conversations about addiction in this country. We had sold out showings and fantastic Q&As on Thursday evening and Friday afternoon with Steve Carell and Timothée Chalamet, and we had to add a few additional shows in NY as well.”

“Beautiful Boy” will expand to top 10 markets next weekend before going into a wide release beginning Nov. 2.

Felix van Groeningen directed from a screenplay he co-wrote with Luke Davies. It’s produced by Brad Pitt’s Plan B with Dede Gardner, Jeremy Kleiner, and Pitt as the producers. Chalamet received an Oscar nomination this year for best actor for his role in “Call Me by Your Name.” Carell was nominated for the same award three years ago for “Foxcatcher.”

“Beautiful Boy” premiered on Sept. 7 at the Toronto International Film Festival. Reviews have been mostly positive with a 64% “fresh” rating on Rotten Tomatoes.

Roadside Attractions and Topic Studios bought the distribution rights in June to “The Oath,” which premiered at the LA Film Festival last month and carries a 67% “fresh” rating on Rotten Tomatoes. The movie, which also stars Tiffany Haddish, expands to 250 screens on Oct. 19.

Excel’s “Jane and Emma,” which tells the story of a young girl who travels to meet Mormonism founder Joseph Smith and forms a bond with his wife, opened with $122,000 at 21 locations.