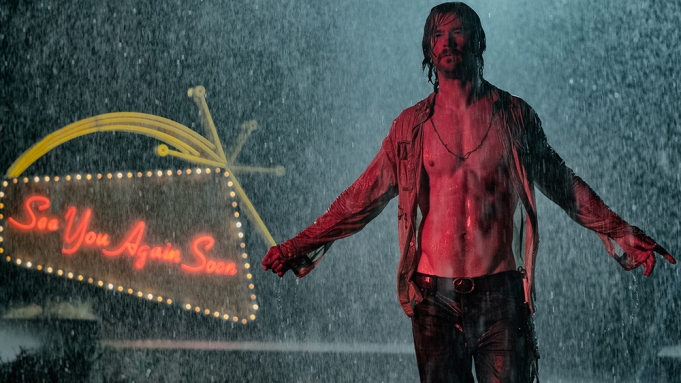 A disheveled Jeff Bridges highlights the latest trailer for Fox’s noir thriller “Bad Times at the El Royale,” portraying a decidedly unreligious priest at a run-down Lake Tahoe hotel on the California-Nevada border.

Bridges plays one of seven strangers who meet at the El Royale over the course of a single night, including a shirtless Chris Hemsworth, a gun-toting gangster played by Dakota Johnson, Cynthia Erivo’s singer, and a vacuum cleaner salesman portrayed by Jon Hamm. Cailee Spaeny, Lewis Pullman, and Nick Offerman also star, with Drew Goddard directing from his own script. Goddard also produced “Bad Times.”

Bridges is warned by the clerk, “This is not a place for a priest, father,” and admits later in the trailer, “Can I confess something to you? I’m not really a priest.”

It’s not quite clear from the trailer why the characters have come to the El Royale and the studio’s description of the plot is somewhat obscure: “Seven strangers, each with a secret to bury, meet at Lake Tahoe’s El Royale, a run-down hotel with a dark past. Over the course of one fateful night, everyone will have a last shot at redemption … before everything goes to hell.”

Bridges received his seventh Oscar nomination last year for “Hell or High Water.” Goddard received an Academy Award nom in 2016 for best adapted screenplay for “The Martian” and directed Hemsworth in 2012’s “The Cabin in the Woods” from a script he co-wrote with Joss Whedon.