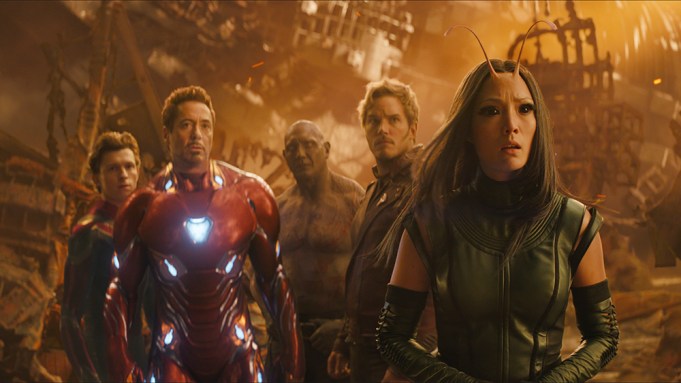 Spoiler Warning: If you have not seen “Avengers: Infinity War” and want to avoid spoilers, for God’s sake, wait to read this until after you do.

By now it’s apparent the gauntlets are off in the Marvel Cinematic Universe. No one is safe.

The latest superhero extravaganza, “Avengers: Infinity War” — the 19th feature in a decade-long build to this moment — ends on the darkest of notes. Even in the tradition of “The Empire Strikes Back,” which left audiences hanging in 1980 following one of the most jaw-dropping reveals in cinema history, it is quite the downer. The body count racked up by directors Anthony and Joe Russo (and screenwriters Christopher Markus and Stephen McFeely) is so staggering, and in some cases so emotional, that they confided in a recent chat with Variety that they’re slightly wary of how some of the younger fans might react.

Indeed, following a snap of supervillain Thanos’ fingers at the end of the film, half the universe appears to perish in clouds of ash like some twisted, somber rapture. Included in the death toll are popular characters like Peter Parker/Spider-Man, T’Challa/Black Panther, Peter Quill/Star-Lord and, in a post-credits stinger, even stalwart Nick Fury. It’s a drastic ratcheting of the stakes for Marvel’s big-screen universe, but for the Russos, it represents a natural progression from “Captain America: The Winter Soldier” to “Captain America: Civil War” to this initial half of a diabolical endgame.

“When we started working with Marvel on ‘Winter Soldier,’ we wanted to do such a radical departure from their first [Captain America] film,” Joe Russo says. “We said, ‘The character is moving forward in time. The interpretation we’re interested in is much more modern than what you had done on the last one,’ and they said, ‘Great. Do it. Let’s see what happens.’ So they’ve always been risk-takers … If you look at every film we’ve done for Marvel, there are huge, game-changing events at the end of the movies. We are interested in pushing the boundaries and pushing the story forward in unexpected ways, surprising the audience as much as we can.”

To that end, he adds that misdirection was employed in the marketing of the film to keep the brand’s very loyal and savvy audience from sniffing out what he and his brother were up to. Trailers, for instance, seemed to indicate that mainstays like Captain America and Iron Man might exit stage left, but along with the other members of the original Avengers team (Thor, Bruce Banner/Hulk, and Natasha Romanoff/Black Widow), they live to fight another day.

“We do our best work when we follow our instincts and tell the story we want to tell,” Joe Russo says. “We’ve had one or two experiences early in our careers where we didn’t do that and we learned a very hard lesson: When you try to predict what an audience wants, you’re going to make mush. When you commit to the story you want to tell, it tends to have a much more resonant impact on the audience … The audience can tell you they love chocolate ice cream, but if you give it to them every day, they’re going to get sick of it real fast. You’ve got to stay ahead of them.”

Brother Anthony adds that when you’re dealing with powerful characters such as the Avengers, they don’t become interesting, human, or relatable until you zero in on their vulnerabilities.

“Unless you have real stakes, you’re sort of limited in terms of the emotional impact a story can have on you,” he says. “You have to go to very difficult places for the stakes to feel real, for the characters to feel like they have something to lose, for the audience to feel like they have something at risk. What we’re looking for in storytelling or art is emotional catharsis. And that’s not simply getting what you want. It’s getting an emotional experience that makes you feel and respond to it and energizes you on some level.”

Nevertheless, the fanbase could be left feeling like its intelligence is being insulted here. There is an age-old tradition of bringing deceased superheroes back to life on the page, so why not on the screen? Plus, given the popularity of Tom Holland’s web-slinger and the stunning box office take for Chadwick Boseman’s Wakandan king — to say nothing of planned sequels in the “Spider-Man” and “Guardians of the Galaxy” franchises — it’s difficult to buy that Marvel would willingly cut off those revenue streams by axing the characters so early in their runs. (The film also plays up a time-reversal element with the use of the Infinity Gauntlet’s Time Stone, pointing to a clear path out of the woods.)

Joe finishes the thought: “They come at an incredibly high cost. For us, there will always be stakes and the stakes have been progressing from film to film. And I think you can extrapolate that they will continue to deepen in ‘Avengers 4.'”

On that chilling note, let the guessing games begin on who’s set to expire in the next installment. “Just you wait,” Joe Russo says with a sly smile.

This is but a teaser of our full interview with the Russos. For more in-depth discussion of “Avengers: Infinity War,” be sure to check out the latest episode of Variety and iHeartRadio’s “Playback” podcast on Thursday, May 3.

Hear all-new episodes of “Playback” via iHeartRadio, iTunes or your preferred podcasting app.