Aretha Franklin Documentary ‘Amazing Grace’: Helping Her ‘Family to Heal and Move on’ 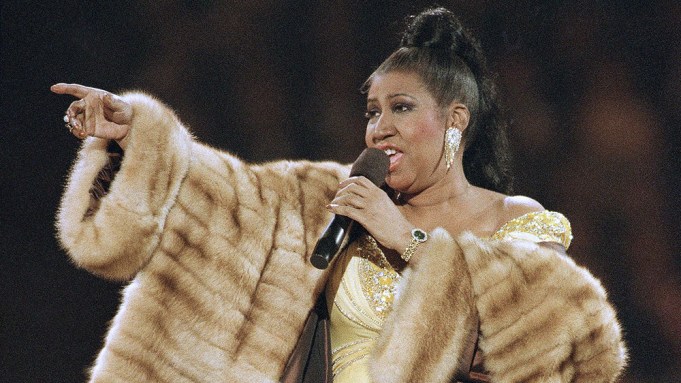 The audience that witnessed DOC NYC’s Monday world premiere of the moving and soulful Aretha Franklin church concert doc “Amazing Grace,” captured on film by Sydney Pollack in 1972, was fortunate indeed. But for actress Gina Gershon and the late Queen of Soul’s nephew Vaughn Franklin, the screening at Manhattan’s SVA Theatre was something far more profound: a family celebration.

“When all of her siblings passed away back-to-back — our aunt Erma, and nine weeks later, my father [in 2002], she stepped in and became our surrogate mother, our rock and our foundation,” said Franklin, who attended the premiere with Sabrina Owens (Aretha’s niece and the film’s producer) and two other relatives. “She helped us mourn and get over our grief, so whenever I can see her now, it feels like she’s reaching out to me and telling me certain things in her music. We’re still grieving [her Aug. 16 death], so it’s definitely helping us as a family to heal and move on.”

For Gershon, who was heading off to guest star on the CW’s “Riverdale,” the premiere also provided some closure. “Alan Elliott, the producer, happens to be my cousin, so I was actually trying to get people involved a little bit years ago when they needed help, but it was a tricky thing to do,” she said of his long effort to locate the film, fix its botched audio synching and bring it to the screen. “Anyone who’s ever worked with Aretha will tell you, she’s got her own way of doing things. . . Thank God he’s been so passionate and tenacious about it.”

The premiere was also a homecoming of sorts for legendary drummer Bernard “Pretty” Purdie, who can be seen onscreen playing at the historic New Temple Missionary Baptist Church concert in LA. He attended the premiere just before a flight to Australia. “She loved [this film], but they couldn’t get things together at the time” for a deal to release it, he said. “It’s really that simple.”

Indeed, the film wasn’t locked until this past Friday, right after renowned engineer Jimmy Douglass (who engineered the 1972 concert album that shares the film’s name, and attended the premiere) flew to Los Angeles to perfect the sound. “The geeky version is that we had a 5.1 mix that we weren’t happy with. Jimmy wasn’t happy when we did a mix three years ago, so we wanted to do a stereo mix with him and get it right,” producer Elliott said. “We finished the DCP Friday afternoon.”

As for getting a distributor on board, with execs from Neon and other labels in attendance, Elliott isn’t in a rush. “First we’re trying to get this [Nov. 20-27 Laemmle Monica in LA and Dec. 7-14 Film Forum in NYC] qualifying run finished, go win some awards,” he said. “The big thing was to own the movie. I didn’t want anyone else to own it. I wanted to do it myself.”

Chris Rock was among the boisterous crowd who clapped along to Franklin’s supernaturally wonderful performance. The crowd was charged up after an intro by “proud Detroiter,” DOC NYC artistic director Thom Powers, and an opening invocation by Rev. Al Sharpton, who used to perform a similar service for her birthday. “Bless this film, that it blesses people all over the world to not only remember that before we had a president of our color, before we had corporate positions, you gave us a queen and that queen never forgot that it was you that held her crown,” he said.

AFI Fest in Los Angeles announced Tuesday that the festival will present a screening of the doc on Thursday, Nov. 15 at TCL Chinese 6 Theatres.