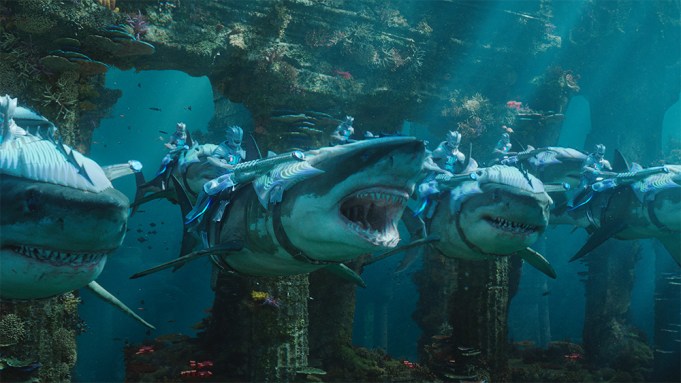 “Aquaman” made a splash with an impressive $9 million from Thursday night showings in North America — and another $4.7 million from special previews prior to Thursday.

Warner Bros.’ “Aquaman” has already generated $332 million in international markets, including $209 million in China in the two weeks before its U.S. launch. Reviews for the Jason Momoa vehicle have been decent, with a current 68% score on Rotten Tomatoes.

The latest addition to the DC Extended Universe is arriving in 4,150 domestic locations, with studio expectations of about $67 million for the Friday-Sunday period, and $120 million for the five days from Friday through Christmas. The movie held two special previews — one on Dec. 15 for Amazon Prime customers and another on Dec. 19 — leading up to its official release.

“Aquaman” carries a hefty $200 million production price tag. It’s the first Warner Bros. stand-alone DC title   since “Wonder Woman,” which pulled in $11 million from Thursday night previews on its way to a massive $103 million launch weekend and eventual $412 million domestic gross. In October, Sony’s “Venom” took in $10 million from Thursday previews and made $80 million in its launch frame.

Disney’s “Mary Poppins Returns” is expected to contend for second place this weekend. The live-action sequel, starring Emily Blunt as the iconic British nanny, grossed $8.8 million at 4,090 North American sites on Wednesday and Thursday. It has been forecast to wind up with at least $35 million domestically in its first five days.

Rob Marshall, the filmmaker behind “Chicago” and “Into the Woods,” directed “Mary Poppins Returns, which cost $130 million before a global marketing push. The film features new music from Marc Shaiman and Scott Wittman. The sequel to the 1964 original, which starred Julie Andrews and Dick Van Dyke, will debut in Brazil, France, Germany, Italy, Spain, the U.K., Belgium, Netherlands, and Austria this weekend.

Paramount’s “Bumblebee,” its sixth entry in the “Transformers” franchise, reeled in $2.2 million on Thursday night, in addition to $700,000 on a Dec. 8 preview. “Bumblebee,” starring Hailee Steinfeld in a prequel to the 2007 original “Transformers,” is expanding to 3,550 domestic locations on Friday. The pic is expected to earn about $30 million in its first three days. The film has generated surprisingly strong critical support with a 94% “fresh” rating on Rotten Tomatoes.

Meanwhile, STXfilms’ romantic comedy “Second Act,” starring Jennifer Lopez, debuted with a moderate $515,000 on Thursday night and will expand to 2,607 locations on Friday. And Universal-DreamWorks Pictures’ “Welcome to Marwen” made a quiet $190,000 in previews from 1,600 theaters on Thursday night and widens to 1,900 sites on Friday. Both titles have generated forecasts for opening weekends of $7 million to $13 million.

Sony’s sophomore weekend of “Spider-Man: Into the Spider-Verse” will be in the mix after winning last weekend’s frame with $35.4 million. The animated title has pulled in $45 million through Wednesday. Clint Eastwood’s drama “The Mule” is entering its second weekend with $25 million in its first seven days for Warner Bros.

The crowded pre-Christmas weekend comes with the domestic box office leading last year by 7.8%, with $11.19 billion, as of Dec. 19 following monthly records in February, April, June, and October, according to Comscore. The final 2018 total should surpass 2016’s record of $11.4 billion, noted Paul Dergarabedian, senior media analyst at the box office tracker.

“As the movie theater stands on the precipice of the biggest revenue-generating year in its history, a flurry of activity at the multiplex is in the cards this weekend as four notable newcomers join a solid lineup of blockbusters and awards-season contenders that will bring holiday cheer to the studios, the theater chains, and moviegoers alike,” he added.