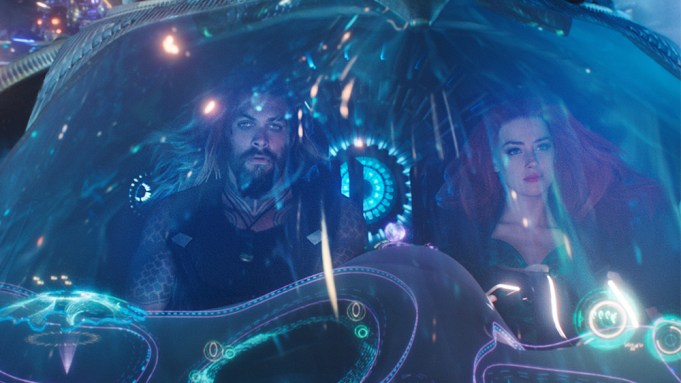 As the 2018 box office closes with a bang, “Aquaman” is ruling North American moviegoing with $137 million in its first week in theaters.

The Warner Bros. tentpole took in $14.6 million at 4,125 locations on Thursday. “Aquaman” has also performed powerfully overseas with $473.6 million since launching on Dec. 7. China has led the way with $246 million, making “Aquaman” the top Warner Bros. title of all time in that market.

“Aquaman” is expected to repeat as the winner of the last weekend of 2018 in North America with at least $40 million. Disney’s second frame of “Mary Poppins Returns” should lead the rest of the pack, with somewhere in the $25 million to $35 million range after taking in $60 million in its first eight days.

Paramount’s sophomore weekend of “Bumblebee” and Sony’s third frame of “Spider-Man: Into the Spider-Verse” will probably be battling for third place at around $20 million each. The animated “Into the Spider-Verse” took in $5.9 million on Thursday to lift its domestic haul to $85.5 million in its 14th day.

Warner Bros.’ third weekend of Clint Eastwood’s drug-runner drama “The Mule” will be in a fight for fifth at about $10 million with a pair of new entries that opened on Christmas Day — Sony’s comedy “Holmes & Watson” and Annapurna’s Dick Cheney biopic “Vice.” “The Mule” picked up $3.1 million on Thursday to lift its 14-day total to $49 million, while “Holmes & Watson” took in $2.5 million on Thursday for a three-day tally of $12.4 million. “Vice” has made $7.7 million in its first two days.

Hollywood studios typically hold off on major releases in the final weekend of the year. The last frame of 2017 saw the third weekend of “Star Wars: The Last Jedi” lead with $52 million, edging the sophomore frame of “Jumanji: Welcome to the Jungle.” Box office tracker Comscore has predicted that total 2018 domestic grosses will hit $11.9 billion, a 7% increase from 2017.

“The biggest year in box office history comes to a close as a host of familiar titles will dominate the multiplex and as is somewhat typical for the final weekend of the year, we will see no new wide release debuts and thus the deja vu-inducing slate,” said Paul Dergarabedian, senior media analyst with Comscore. “‘Aquaman,’ ‘Mary Poppins,’ ‘Bumblebee’ as well as ‘Spider-Man’ and ‘The Mule’ will take us out on a high note as we look toward yet another amazing year in movie theaters in 2019.”