‘Ant-Man and the Wasp’ Reviews: What the Critics Are Saying 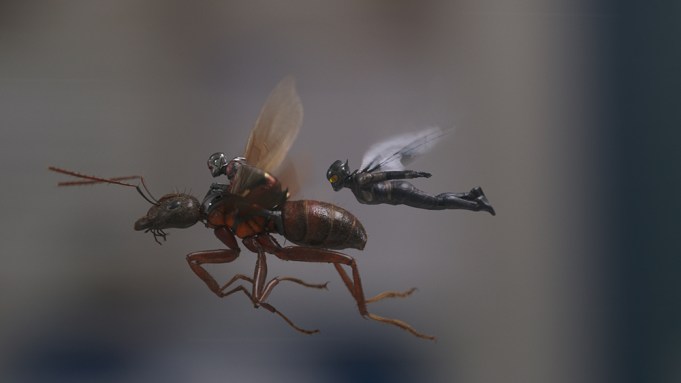 Reviews for “Ant-Man and the Wasp” are flooding in, and the third Marvel Cinematic Universe entry this year is proving that the Marvel formula still has the Midas touch, with a 91% fresh rating on Rotten Tomatoes. According to critics, the success of the micro-sized superhero’s second adventure can be attributed to Paul Rudd and Evangeline Lilly, the powerhouse duo leading the charge of this large-than-life action comedy.

Variety’s own Owen Gleiberman praised director Peyton Reed for investing personality into each of the movie’s scenes as well as Rudd’s confident swagger in the delivery of his lines. Of Lilly’s performance, Gleiberman said, “Evangeline Lilly seizes her moment with a refreshing air of skepticism. Her Hope doesn’t trust the whole superhero thing, and comes off a stronger heroine as a result.”

Read on to see what other critics are saying about “Ant-Man and the Wasp.”

“That each of these films is somehow ‘relevant’ to the greater MCU is a conceit that isn’t always borne out by what’s on-screen. Yet Ant-Man, by living in his own universe of wisecracking micro obsession, justifies his existence. Rudd’s performance has only gained in confidence (having a hit will do that for you). In ‘Ant-Man and the Wasp,’ he’s direct and witty and alive, as when he surveys Lilly’s Wasp and says to Hank, ‘Hold on, you gave her wings?’ There’s a prickly hint of ego coursing beneath the surface of Rudd’s presence. That’s what keeps him fresh.”

“Going dinky is an asset in the car chases, too, as the good guys’ cars can slide under obstacles that the bad guys plow into full speed. Size matters. Any bit featuring large, amusingly fake-looking insects kills. At one point, Ant Man Godzillas his way around San Francisco while the lab — now pint-sized — passes from hand to hand. (Recurring phrases: ‘Get the lab!’ and ‘I’ll get the lab!’) In a hilarious setpiece, Scott goes pint-sized himself and has to toddle around a middle school while the other characters offer him juice boxes and string cheese.”

“Throughout, the characters keep changing size; Hope, who has taken on her mom’s role as the new Wasp, now has a winged high-tech suit of her own, while Scott has been saddled with a malfunctioning older model, at one point getting stuck at the height of a small child. It all climaxes with a fun car chase through the streets of San Francisco, with our heroes using Pym’s technology to shrink their pursuers’ bikes out from under them and lob giant Pez dispensers in their way. But the scale of the stakes never changes. For better and worse, ‘Ant-Man and the Wasp’ knows it’s small potatoes.”

“Sometimes better-than-good things do come in small packages. The proof can be found in ‘Ant-Man and the Wasp,’ a fizzy treat of a sequel that retains the becoming modesty of the original, but with a timely new twist. The Wasp, played by the radiant Evangeline Lilly, becomes the first female character ever to appear in the title of a Marvel movie. (Time’s up for sexism in the MCU.) The Wasp, aka Hope Van Dyne, basically sat around waiting last time out while the action focused on Scott and her father, the original Ant-Man Hank Pym (Michael Douglas) who discovered the formula that allowed him to shrink and gain superhuman strength. The guys did all the fun stuff. No more. Hope gets her own power suit this time – and wings! Eat your heart out, Black Widow. And her relationship with Scott, combative and romantic often at the same time, fires up the plot.”

“While Ant-Man’s technically ‘the star,’ this is most definitely the Wasp’s movie to own, and the smirking, enjoyably no-nonsense role fits Lilly well. It’s all romantic tension and witty banter between Scott and Hope, who needles him about his semi-Avenger status: When he gets stuck the size of a kindergartener, she chides him, ‘If only Cap could see you now.’ Her verbal jabs pack as much punch as her fighting ones, and after spending the first movie with her as a capable woman yearning to be a superhero, watching Wasp finally take flight and foil bad guys with a ginormous Hello Kitty Pez dispenser is a cathartic blast.”

“‘Ant-Man and the Wasp’ is an airy, nimble piece of filmmaking: Reed’s confidence to unapologetically embrace weirdness — like imagery of ants playing drums or responding to telepathic commands — gives the franchise its distinctly playful spirit. His stars, Paul Rudd and Evangeline Lilly, reprise their roles and further energize Marvel’s most lovable romance. And the action sequences, with their constant, dynamic manipulation of size and scope, are as creative as they are thrilling. The film is bundles of fun, so much so that I found myself wishing it had a bit more to offer than just a good time at the movies.”

“The occasional lightness of ‘Ant-Man and the Wasp’ feels unique to this sub-franchise. Very little is really at stake here, beyond the freaky possibility that Paul Rudd will play Michelle Pfeiffer more than Michelle Pfeiffer does. (It’s a quantum entanglement thing.) But the forced whimsy is a pose, a defensive posture, a way to excuse all the clockwork plot mechanics and halfhearted characterizations.”

“Watching these flicks is like being a Scientologist: You gotta be level OT VIII just to understand the exposition. For ‘Wasp,’ if you missed ‘Civil War,’ or have forgotten the plot, it doesn’t hold up as a stand-alone movie. I don’t think Marvel should squish ‘Ant-Man’ just yet, especially with a leading man as excellent as Rudd. The studio can squeeze more and better films out of this hero if director Peyton Reed reverts to what made the first movie so strong — discovering the magical fun of being in control of your own size.”

“Everything in the movie is perfectly fine, but there isn’t a ton of variation. This movie doesn’t have the big, standout action setpiece, and even the film’s climactic car chase through the streets of San Francisco seems like the middle action sequence of most other Marvel movies. This isn’t a complaint, exactly, but it lacks a certain degree of rising and falling action; everything is sort of at the same pitch. Following the dramatic heft of Infinity War, however, this is a breath of fresh air, reminding us that even within the MCU, there are different levels of superheroics.”

“Marvel has demonstrated its ability to tell a wide variety of stories featuring its characters — including its expansion into television — and as noted, there is something to be said for doing what amounts to a smaller-boned version of a superhero movie, without tons of cameos and crossovers. On that level, ‘Ant-Man and the Wasp’ works well enough. But for all its talk about plunging into the quantum realm, it’s more of a hop than a leap.”

“Ant-Man and the Wasp” hits theaters on July 6.