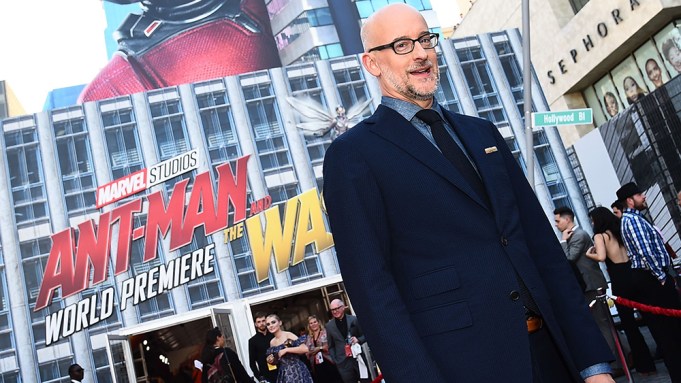 Those in attendance at Grauman’s Chinese Theatre in Hollywood were shrunk down to size for Marvel’s larger-than-life premiere of “Ant-Man and the Wasp.”

The red carpet featured several props from the movie, such as the quantum vehicle, the car created by Hank Pym (Michael Douglas) to shrink into different dimensions, as well as over-sized everyday objects, such as a Dell laptop, to give those in attendance the feeling of what it would be like to be shrunk down to the two titular heroes’ size.

“Ant-Man and the Wasp” takes place two years after the events of “Captain America: Civil War” and right before “Avengers: Infinity War.” Despite being under house arrest, Paul Rudd‘s Scott Lang teams up with Douglas’ Hank Pym and his daughter Evangeline Lilly‘s Hope van Dyne to rescue Pym’s wife (played by Michelle Pfeiffer) from the quantum realm, all the while being thwarted by Hannah John-Kamen‘s Ghost, a villain with the ability to phase through solid objects.

The original comic book version of Ghost wasn’t a female character like she is in the movie, however, but John-Kamen said she felt a freedom to be able to do what she wanted with the female Ghost, as she didn’t feel like the comic book character had a true origin story.

“You don’t really know who he is, so I really had a real freedom to take him off the page and give her life,” John-Kamen said. “I think in the Marvel Universe, and any universe, having strong female characters that inspire and empower and influence people, I think why the hell wouldn’t we want more of that?”

Director Peyton Reed said nailing the Wasp as a character was the single most important aspect of the movie, and he said he worked closely with Lilly to do so.

“With the origin story done, we were free to start this movie seeing her with her full glory and she hasn’t wasted any time. She’s very decisve and clear about the kind of hero she wants to be,” Peyton said. “Evangeline and I spent a lot of time during the writing phase and throughout figuring out all the details of who she is, how she moves, how she fights, just her whole approach to being a hero and that’s really exciting to me.”

David Dastmalchian reprises his role as Kurt, a Russian hacker who works with Scott Lang as part of a trio he calls the “ant-ourage” along with Michael Peña and Tip “T.I.” Harris. Dastmalchian said his character, being a reformed ex-convict, can help bring hope and optimism to audiences despite the ongoing real-world tensions between the United States and Russia.

“He reflects what I hope is a message of authentic optimism and potential for the world even though there is, at this moment, such a dark tenor and such a denial of how foreign entities try to, and did in a lot of ways, sway information for our country,” Dastmalchian said. “There is the opportunity for a future where we can still come together.”