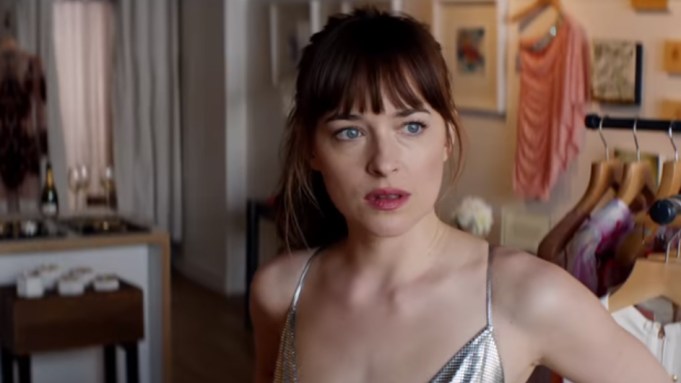 With the new year comes a major reveal in the latest trailer for Universal’s “Fifty Shades Freed” — Anastasia Steele is pregnant.

The reveal came Tuesday in the final five seconds of the footage, with Dakota Johnson’s startled reaction to a disembodied voice — presumably a doctor — telling her, “It seems you’re pregnant, Mrs. Grey.”

The trailer also includes the franchise’s notorious wild sex scenes, a marriage ceremony, and the duo facing off against opponents from the past in the form of Anastasia’s former boss Jack, who appears to be stalking her, and Christian’s former acquaintance Elena.

There’s also a female architect, tasked with designing a mega-mansion for the couple. Anastasia tells the architect not to ignore her, adding forcefully, “You may call me Mrs. Grey.”

The film opens five days before Valentine’s Day on Feb. 9. Watch the trailer above.