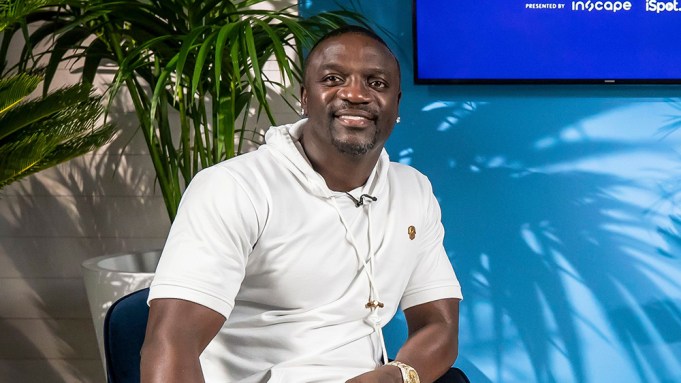 Akon for president? The Grammy-winning singer says that he’s seriously considering running in 2020 as a result of Donald Trump’s tumultuous 18 months in the White House. While his platform is still fuzzy — he doesn’t even know if he’d enter the race as a Democrat or a Republican — he’s already picked out a running mate in the form of Facebook’s Mark Zuckerberg.

Akon was in the South of France this week to talk to advertisers at Cannes Lions about AKoin, a new cryptocurrency that he’s intending to launch in West Africa. He stopped by the Variety Studio to discuss that plan, while also sharing his thoughts on the Trump administration’s policy of separating families at the border and why he’s contemplating a future in politics.

You have an idea for a new form of currency called AKoin?
Yeah. I was here to launch AKoin, which is my dream for it to be the currency of Africa in the future. I feel like cryptocurrency is going to be the savior. I think the younger generation in Africa are very keen to how digital works. Everyone has two cell phones, even if you live in a village. It’s only right you transform into that new technology.

How did you come with the name?
It was supposed to be the “Africa Coin” in my mind. I was like, “Akoin. That’s actually kind of perfect!” The headquarters will be in multiple places, but ultimately, Africa will be the main headquarters. It’s probably going to be in Senegal. There’s a huge development that I’m putting together. My idea is to build a full crypto city in Senegal which will house the crypto coin itself, and ultimately invite the crypto community in.

What’s a crypto city?
A crypto city is pretty much a city run by crypto-nites.

That sounds like something from Superman.
It does sound crazy. The engine will be cryptocurrency, completely immune from the outside currency rules. It’s a futuristic city. All the ideas, all the way down to energy, will be renewable. I’m trying to create something that’s never been done before in Africa.

How much do you think this will cost?
You just never know what numbers going to be. The whole idea is try to do it in a very cost effective way.

How did you first learn about cryptocurrency?
I learned about it just being in the community. I was always a digital geek. It started with me and music, actually. When everyone was into CDs, and CDs were going into MP3s, I realized that ringtones was the smartest way to sell music. And while everyone was selling music for $2.99 a single, I was selling ringtones: 15 seconds at $4.99 a piece. When you do those numbers, it’s like, “Whoa.” It triggered me getting more into the digital because I was always just attracted to something that was new, innovative and just outside the box.

Do you use Bitcoin?
Yeah. I have a very interesting story about Bitcoin. I don’t know if I should be saying this right now. I was probably one of the beginners in the beginning stages of it. I kind of like to leave that as a mystery, but if you ever run into Brock Pierce ask him about the story with Akon and Bitcoin. He’ll tell you.

I wanted to talk to you about the politics. After the election, you said you were hopeful about Donald Trump.
I obviously didn’t vote for him. I was a Hillary Clinton supporter. But now that he was in there, my thing was, “Don’t count him out yet.” I’m personally disappointed. I think his administration is missing basic compassion. I think it’s to the point where the love is gone, and his administration needs to be humanized. There’s no compassion, no love for the everyday person outside of his base, and even the base, I don’t think they’re happy with what’s happening. I think it’s like the tears of a clown, where the people that are trying to defend him are trying to find new ways to defend him. The American people, at this point, the only thing they can do is wait for the midterm elections to come and just vote them out to make a different. Otherwise, the U.S.’s credibility, reputation, influence, all that’s going down the drain every day for every decision he makes.

What do you think of the Trump administration’s decision to separate immigrant families at the border?
You have to be an evil person to think that’s OK. These are kids. This is the kind of trauma that goes with you for the rest of your life. It’s not something that you can get over. Some of them are under 5 years old. It’s crazy, man.

Are you interested in running for office?
At first, I used to always tell myself that I would never do it. But now I’m starting to realize through experience that the only way to make change is to be in it. So I’ve been seriously thinking about running for office lately.

And who is that?
Donald Trump.

You’ve said in the past that you’d consider Mark Zuckerberg for your running mate.
I would love for him to be my running mate, and I think his brain would be very helpful. He would be my No. 1 running mate. Let’s see what happens. I might just give it a shot. I’ll announce it as I’m a thousand percent confirmed.

What would be your strategy for defeating Trump?
He’d be my only focus. He gave the strategy already. There’s not much I gotta do. At the end of the day, he is the strategy. Now we just have to specifically pinpoint all those things. Every move he’s making is his personal opinion, his personal belief. I think as a president your moves should be what the people need or what the people deserve. That’s who you’re working for. You’re not working for yourself.

Would you run as a Democrat or a Republican?
That’s actually a good question. I never decided if I move forward which way I would go, party wise. If there was a way I could go in without being attached to a party at all, that’s the direction I would prefer to go.