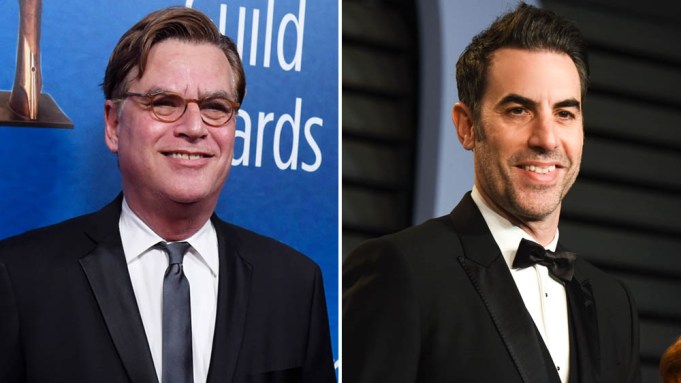 Steven Spielberg’s Amblin Entertainment’s long-awaited political drama “The Trial of the Chicago 7” looks to be closer than ever to getting off the ground, with a new director and an A-list cast coming together.

Sources tell Variety that Aaron Sorkin is on board to direct with Sacha Baron Cohen in early talks to join the cast.

Sorkin penned the original script. At one point, Spielberg himself considered directing, but a writers strike forced him to delay the film. When he couldn’t pin down a time to direct the movie, he moved on, and the pic went into development purgatory.

Spielberg tried revving up the project in 2013, attaching Paul Greengrass to direct, but after a budget couldn’t be agreed on, Greengrass parted ways with the film and it was shelved again.

Following his directorial debut on “Molly’s Game,” Spielberg saw Sorkin as the perfect candidate to take over directing responsibilities on “Chicago 7.”

Based on the the documentary by Brett Morgan called “Chicago 10”, the film is based on the infamous 1969 trial of seven defendants charged by the federal government with conspiracy and more, arising from the countercultural protests in Chicago at the 1968 Democratic National Convention. The trial transfixed the nation and sparked a conversation about mayhem intended to undermine the U.S. government.

An A-list ensemble had always been a goal for the movie, with talent like Will Smith being considered during the time of the project’s first brush with development. This time around, Sorkin is also looking for big talent. Coincidentally, Baron Cohen was a top choice of Spielberg’s to play activist Abbie Hoffman in 2008, and it looks like Sorkin still sees him as the perfect actor for the role.

Sorkin has been a coveted screenwriter since the ’90s with classic scripts like “A Few Good Men,” “The Social Network,” and “The American President,” in addition to being the creator of “The West Wing.” Following his directing debut on “Molly’s Game,” he has taken an eye to directing the scripts he writes as well.

He most recently adapted “To Kill A Mockingbird” for its broadway debut in December.

As for Baron Cohen, the actor is coming off his critically acclaimed Showtime series “Who Is America?” and is currently shooting the Netflix series “The Spy.”

He had previously won a Golden Globe for his work in “Borat” and has also appeared in “Hugo”, Les Miserables” and “Sweeney Todd.”

Sorkin and Baron Cohen are repped by CAA.