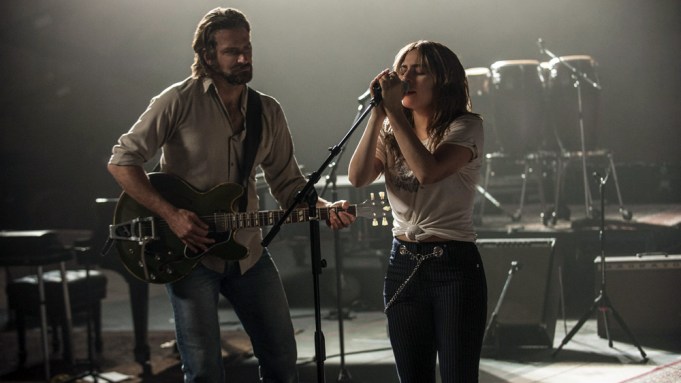 Bradley Cooper falls in love with Lady Gaga in Warner Bros.’ first trailer for its remake of “A Star Is Born.”

Cooper, who also directed, stars as veteran singer Jackson Maine. The footage opens with him standing before a massive audience, singing a ballad that includes the lyric “Maybe it’s time to let the old ways down.”

He then discovers Gaga’s character, a struggling artist named Ally who’s short on confidence. “I don’t sing my own songs,” she tells Cooper. “I just don’t feel comfortable. Almost every single person has told me that they liked the way I sounded, but they didn’t like the way I looked.”

It’s the third remake of 1937’s “A Star Is Born,” for which Janet Gaynor won the Academy Award for her role as an aspiring actress dealing with a fading star, played by Fredric March. It was rebooted in 1954 with Judy Garland and James Mason, and in 1976 with Barbra Streisand and Kris Kristofferson.

To add to the authenticity, Cooper and Gaga performed at Coachella and at Glastonbury, where they shared the same stage as Kristofferson.

The trailer bills the singer as Lady Gaga, not as Stefani Germanotta. Initial publicity materials for the film listed Gaga by her given name.

Cooper came on as director following his work with Clint Eastwood on “American Sniper.” Eastwood attempted to get the film made for years, with Cooper in the role of the fading star and Beyonce as his co-star, then suggested that Cooper direct.

The film is produced by Bill Gerber, Jon Peters, Todd Phillips, Lynette Howell Taylor, and Cooper, while Basil Iwanyk, Ravi Mehta, Heather Parry and Michael Rapino are serving as executive producers. Cooper, Will Fetters, and Eric Roth wrote the screenplay, based on the 1937 story by William A. Wellman and Robert Carson.

The film hits theaters on Oct. 5.