Who Should Replace Kevin Hart as Oscars Host? 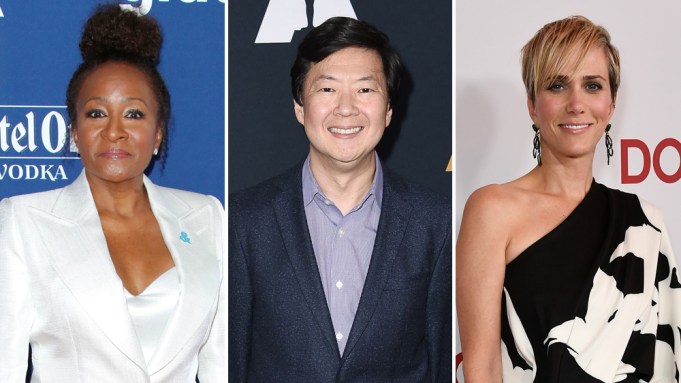 Less than two days after announcing Kevin Hart as its Oscar host, the Academy is already on the look-out for a replacement, following widespread protests about Hart’s homophobic past tweets. Many are turning to “Saturday Night Live” actresses Kate McKinnon and Kristen Wiig as possible solutions, while others are looking to proven veterans like Ellen DeGeneres and Neil Patrick Harris. See Variety‘s full list of possible host replacements below.

The rapper-turned-actress claimed the hearts of fans with scene-stealing roles in “Ocean’s Eight” and “Crazy Rich Asians” this past summer. Soon after, she also hosted an episode of “Saturday Night Live” where she further showcased her comedy chops in skits about a late-night dance battle and an ancient Egyptian team of hair and makeup artists.

The three-time Academy Award host would have some big shoes to fill, but considering that they’re her own, it’s safe to say she would be a solid bet for this year’s open position. DeGeneres’ previous stints as Academy host have historically garnered rave reviews, and during her latest hosting gig, she took the social media world by storm with the second-most-retweeted Tweet ever. She’s also seeing staunch support from a host of fans on the social media platform, including Chrissy Teigen.

The eponymous host of “Billy on the Street” is best known for his roaming gameshow, which takes the streets of New York by storm with celebrity guests and a lot of yelling. And while his penchant for dry humor and sarcastic comments may rub some viewers the wrong way, it would definitely add some spice to an awards show that has otherwise struggled with bland jokes and low viewership.

Hannah Gadsby’s name has been floated after her one-minute Emmy presentation stole the show. The comedian also hosted the successful Netflix stand-up special “Nanette,” which featured social commentary on a number of LGBTQ issues and garnered strong reviews.

During Thursday’s GQ Men of the Year party, actress Lena Waithe offered her support for Donald Glover as next year’s Oscar host. Although now known for his music and hit show “Atlanta,” Glover’s comedy background makes him a strong candidate for the hosting gig. As a writer for NBC’s “30 Rock” and a character in “Community,” in addition to his stand-up experience, Glover’s brand of clever humor would bring some much-needed diversity to the classic awards show gig.

Tiffany Haddish’s meteoric rise to fame has cemented her status as one of this year’s top comedic actresses. In “Girls Night,” her outrageous one-liners captured audience’s hearts, and in her latest film “Night School,” she shows off her comedic timing once again as a late-night teacher of adult education. Haddish’s brand of off-the-wall humor would be sure to brighten up any awards show, and Twitter agreed when it sparked a social media campaign for her and Maya Rudolph at last year’s Academy Awards.

Another Oscar veteran, Neil Patrick Harris first hosted the Academy Awards in 2015, opening the show with a musical number that many praised for celebrating the magic of movies. And with previous gigs emceeing the Tonys and the Emmys, Harris possesses the professional experience to put on a good show.

The “Crazy Rich Asians” star has been a comedy mainstay since his stint as Mr. Chow in the first “Hangover” film, and he’s no stranger to making a stir at popular awards shows. At this year’s MTV VMAs, Twitter loved his Barenaked Ladies joke during his presentation for best new artist. He also gave a shoutout to the entire roster of One Direction, Smash Mouth, and Chumbawumba.

The comedy duo first rose to fame with their “Key & Peele” sketch series on Comedy Central garnering recognition for Keegan Michael-Key’s appearance at the White House Correspondents Dinner and Jordan Peele’s hit film “Get Out.” The pair also has hosting experience from the 2016 MTV Video Music Awards, where they worked as the announcers.

Best known for her outrageous characters, Melissa McCarthy makes up for her lack of hosting experience with her tremendous comedy chops. McCarthy’s roster of hit films, including “The Heat,” “Bridesmaids,” and “Spy,” all established the actress as one of Hollywood’s top comedic performers. But, unfortunately, she’s not interested. We asked.

Kate McKinnon’s flair for impressions makes her one of the most-talked-about candidates for the position. On “SNL,” the actress boasts a myriad of popular characters including Hillary Clinton and Jeff Sessions, which would provide her with the perfect material for any sketch.

A Twitter favorite for the position, Lin Manuel-Miranda has had yet another breakout year, starring as Jack in the upcoming Mary Poppins sequel “Mary Poppins Returns.” With his background in musical theater as well, the “Hamilton” mastermind would be a welcome addition to the Oscar programming.

Oswalt’s work as a stand-up comedian speaks for itself. His Netflix comedy special “Annihilation” is certified fresh at 100% on Rotten Tomatoes and garnered strong reviews for his sharp humor about some of the biggest moments in his life.

As the star and executive producer of HBO’s “Insecure,” Issa Rae has been getting some buzz on Twitter about hosting: “Ok. @TheAcademy- here you go- ME OR @IssaRae OR @SarahKSilverman OR @aliwong OR @iamsambee OR @robinthede OR @UnapologeticAMC OR ANY OTHER WOMAN WORKING IN HOLLYWOOD RIGHT NOW WHO WANTS TO,” wrote Busy Philipps. The “Hate U Give” actress is a logical choice for the open host position, having established herself in pop culture with her appearance in Drake’s “Nice for What” music video and four seasons of “Insecure.”

The comedian, actress, and “SNL” alum is known for her cinematic roles in “Bridesmaids” and “Grownups,” as well as television shows such as NBC’s “The Good Place” and Amazon’s “Forever” with Fred Armisen. After Rudolph and Haddish stole the show at last year’s Oscars while presenting awards for documentary short subject and live-action short film, they sparked a Twitter campaign suggesting they host the 2019 Oscars together.

Sykes got her start as a writer on “The Chris Rock Show,” and has since come into her own as an actress and comedian. Best known for her work on “Curb Your Enthusiasm,” “Evan Almighty,” “License to Wed,” and  “Monster in Law,” as well as her standup specials, Sykes has been a fixture in comedy since the early 2000s.

Whether paired with Will Ferrell or Steve Carell at the Golden Globes, the “SNL” alum steals the show every time as an awards show presenter. The “Bridesmaids” actress and comedian also boasts a huge resume of comedic success after getting her start in the early 2000s at the Groundlings comedy troupe, and appearing in a TV series “The Joe Schmo Show” before being picked up by “SNL.”

After proving their hosting mettle at last year’s Indie Spirit Awards, John Mulaney and Nick Kroll would be well suited to hosting the Oscars, even if that means reviving their “Oh, Hello” personas of George St. Geegland and Gil Faizon. The comedians have teamed on multiple projects and shown their chops across television series like “Documentary Now” and “Big Mouth” and stand-up specials for Netflix.