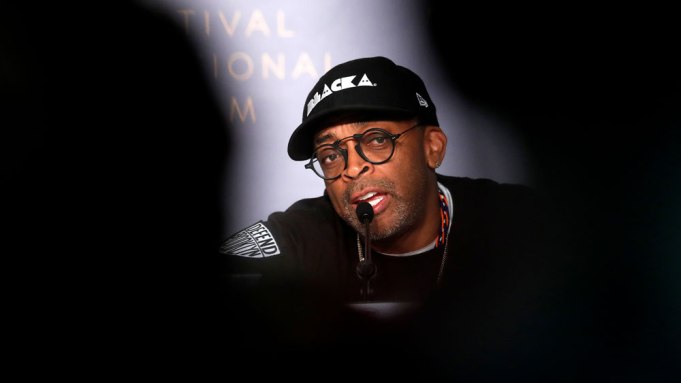 Spike Lee delivered a blistering attack against Donald Trump on Tuesday, refusing to mention the president by name while saying he’d shirked his moral duty to speak out in the aftermath of last year’s deadly riots in Charlottesville.

Appearing at a press conference alongside the stars of “BlacKkKlansman,” which world premiered in Cannes on Monday night, the director said the film was on the “right side of history” while denouncing the president for not taking a firm stance in the wake of violence that erupted following a white nationalist rally, leaving three people dead.

“That motherf—er was given a chance to say we are bout love, and not hate, and that motherf—er did not denounce the motherf—ing Klan, the alt-right, and those Nazi motherf—ers,” he said.

“It was a defining moment, and he could’ve said to the world…that we were better than that.”

“BlacKkKlansman” is based on the incredible true story of black police detective Ron Stallworth (John David Washington), who infiltrated the Ku Klux Klan in the 1970s.

Describing it as a “major comeback” for Lee, Variety called the film “as much a compelling black empowerment story as it is an electrifying commentary on the problems of African-American representation across more than a century of cinema.”

Though set in the ‘70s, Lee said it was “our job as filmmakers and storytellers…to connect this period piece to the present day.” He framed the film in the context of the bloody history of a country he said “was built upon the genocide of native people, and slavery,” calling it “the fabric of the United States of America.”

He added, “What’s happening did not just pop up out of thin air.”

Lee recalled watching the Charlottesville violence unfold on CNN while in Martha’s Vineyard, and recognizing “right away” that the footage “had to be my…coda for the film.”

The director got permission from the mother of Heather Heyer, who was killed when a man drove a Dodge Charger into a crowd of protesters, to use footage of her death in the movie. “I was not gonna put that murder scene in the film without her blessing,” he said.

Focus will be releasing “BlacKkKlansman” in the U.S. on the one-year anniversary of the riots, which Lee described as an “ugly, ugly, ugly blemish on the United States of America.”

Calling the film a “wake-up call,” he repeatedly returned to the moral failings of President Trump, while adding that the rise in right-wing hate speech and violence had become a global scourge. “We look to our leaders to give us direction, to make moral decisions, and I like to say this is not just something that pertains to the United States of America, this bulls–t is going all over the world,” he said.

“BlacKkKlansman” is peppered with digs at the current president – one KKK member talks about embracing an “America first” policy – while drawing parallels between the rise of Trump and the political aspirations of former Grand Wizard David Duke (Topher Grace). After the premiere, the film received a six-minute standing ovation.

Lee walked the red carpet Monday evening wearing the iconic “love” and “hate” brass knuckles from “Do the Right Thing.” Speaking on Tuesday, he said that while he couldn’t predict the outcome of this year’s mid-term elections – “even though my friends call me Negrodamus” – he still remained hopeful about the future.

“I believe in hope, but I’m not blind or deaf,” he said. “I think that you could be hopeful but still be aware of what’s happening. Too many people walking around in a daze.”