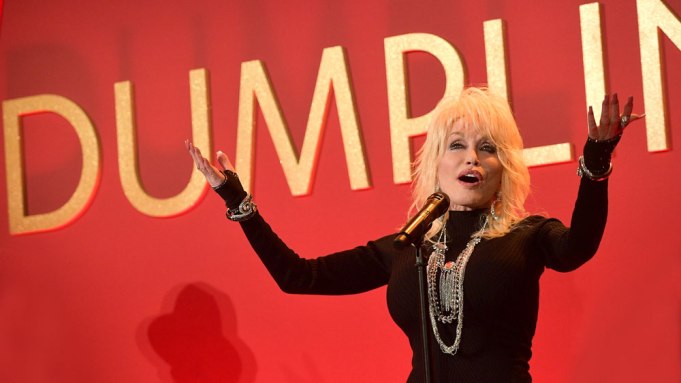 Dolly Parton has livened up the Oscar trail this year with her new song “Girl in the Movies,” from the Netflix movie “Dumplin.'” Following a live performance of the song for a select industry crowd (mostly journalists and Golden Globes voters) at the Four Seasons on Monday, the recording icon stopped by a screening of the film with “Dumplin'” star Danielle Macdonald to field questions from the audience.

When told the crowd was primarily Screen Actors Guild Awards voters, Parton gestured to her trademark curves and quipped, “I took care of all my saggin’!”

Parton has previously been Oscar-nominated for “Nine to Five,” from the 1980 song of the same name, and “Travelin’ Thru,” from 2005’s “Transamerica.” This year, the original song race is shaping up to be a star-studded affair, with Warner Bros. submitting three Lady Gaga songs from “A Star is Born,” Kendrick Lamar in the mix with “Black Panther” and Disney’s “Mary Poppins Returns” still on the way.

“Dumplin'” is based on the book by Julie Murphy, which tells the story of Willowdean, a plus-size teenager who enters the local beauty pageant run by her mother, played by Jennifer Aniston (who also produced). In the novel, Willowdean’s late Aunt Lucy was a huge fan of Parton, and often quoted her songs and life philosophy. Parton recalled how when the book first came out, she couldn’t stop hearing about it. “I kept having all these people calling and saying, ‘There’s a book out and it’s got you all over it,'” she said. “I read it and loved it and I was really touched.”

Some years later Parton got a call from Jennifer Aniston and her production company Echo Films. When asked if Parton would license some of her music for the movie, she didn’t hesitate. “I said, ‘Absolutely.’ Then they asked if I would write a theme song.” It was suggested she pair with Linda Perry, who she said she didn’t know personally, though she was a great fan of Christina Aguilera’s “Beautiful,” a Perry track.

“We were just so natural together,” Parton said. “There was a rawness and a realness about us and the way we saw and felt music. So when we started writing together, it just felt so natural.”

So natural that instead of one song, Parton and Perry came up with six new tunes for the original soundtrack, which releases Nov. 30, just ahead of the film’s Dec. 7 release.

Parton even recruited Aniston and Macdonald to contribute to a song called “Push and Pull” about the film’s mother-daughter dynamic, an event that Macdonald still seemed unable to fully comprehend. “I found out the day before we were doing this so I showed up at the studio and had no idea you were going to be there,” Macdonald confessed to Parton.

Macdonald, an Australian actress who played an aspiring rapper in last year’s indie “Patti Cake$,” says it was that film that helped her land the “Dumplin'” role. “I met Jen and everyone involved and just kept having meetings until I was offered the part,” she said. “It was actually kind of intimidating not having a traditional audition for it. I knew I loved the character and wanted to play her but it was a little terrifying. If they hadn’t seen me do it … what if I’m bad?”

Asked about her own acting experiences, Parton said she’s auditioned from time to time but noted, “For movies, I can only play one thing and that’s me. I only take roles I actually feel I can be myself in. Like ‘Steel Magnolias,’ if I wasn’t a singer I’d be a beautician. ‘Nine to Five’ was different because I haven’t been a secretary.” She then brought the house down by adding, “I made a better whore in ‘Best Little Whorehouse in Texas!'”

Parton also wowed the crowd with an impromptu, a cappella rendition of “Girl in the Movies,” explaining how she was inspired to write the song for Macdonald’s character after seeing a rough cut of the film.

“Every song in the soundtrack is based on an emotion I felt while watching the movie,” Parton said. “I saw the movie and pictured her character going to the movies and how that big screen represents life. I pictured her without her Aunt Lucy, thinking about her dreams and her tears … I thought it would be a sweet little thing to write about.”

Macdonald added, “It just felt like somebody had written everything I was feeling inside at that moment and put it in a song.”