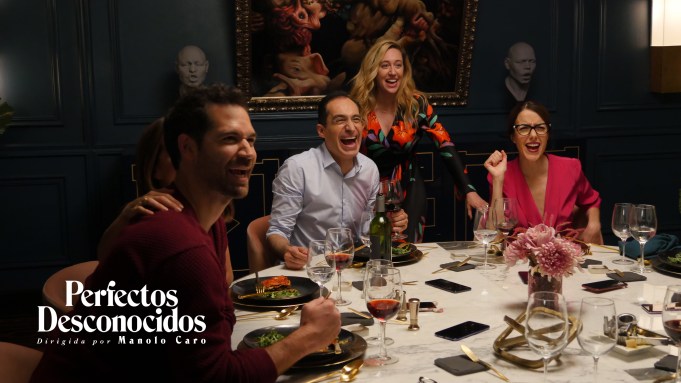 Manolo Caro’s pan-Latin American version of movie franchise hit “Perfect Strangers” is set for a Dec. 25 release in Mexico by its producer-distributor Cinepolis, followed by a Jan. 11 U.S. bow from Pantelion. Variety has been given exclusive access to the dark ensemble comedy’s official U.S. trailer and poster.

“Perfect Strangers” revolves around a circle of friends who decide to lay bare all their secrets at a dinner, placing their smartphones on the table to share any incoming messages or calls that evening. What starts as a parlor game takes an unexpected, disastrous turn.

“The premise cleverly zeroes in on a fear few want to even contemplate: Being found out,” said Variety critic Jay Weissberg in his review. “Once upon a time secrets were shared between friends, but now the cell has become the repository of our illicit behaviors, and the moment that’s exposed, all is laid bare, with no protection,” he added.

The Spanish version by Alex de la Iglesia, who made his own interpretation of the original concept, was a box office smash hit, grossing $25.8 million.

Buoyed by its success elsewhere, Cinepolis Distribution is aiming for its widest nationwide release ever – on more than 1,000 screens – while Pantelion, a Lionsgate-Televisa joint venture, plans a platform release.

The dark comedy is Mexican exhibition giant Cinepolis’ first venture into feature film production and had its world premiere at the 16th Morelia Film Festival on Oct. 23.

Caro is best known for his popular Netflix dramedy series “La Casa de las Flores” (“The House of Flowers”), which has been renewed for two more seasons.