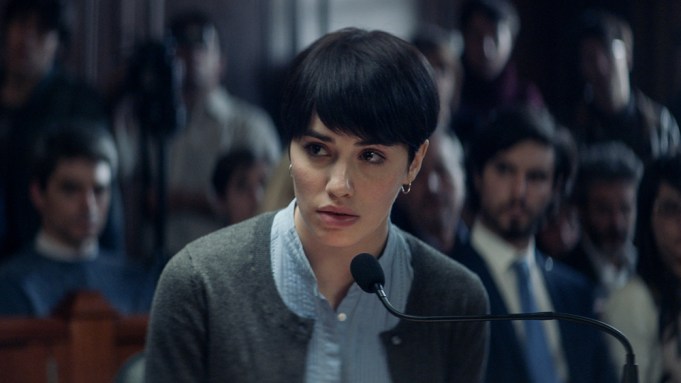 Variety has been given an exclusive clip from crime drama “Acusada” (The Accused), which plays in competition at the Venice Film Festival. The Argentinian film, which is also screening at the Toronto Film Festival, stars Lali Esposito and Leonardo Sbaraglia, with Gael Garcia Bernal in a supporting role.

The film, directed by Gonzalo Tobal, centers on Dolores, a beautiful young woman who is charged with the murder of her best friend. As her loved ones fight to prove her innocence and the trial is about to begin, Dolores puts the entire strategy at risk.

Tobal says that he has been “captivated” by true crime stories. “I imagine obsessively how these stories are lived behind the scenes: what happens to a person when going through such an experience in which private and public affairs are mixed with so much violence,” he says.

The film is simultaneously a crime film and “a portrait of this question, of the external and internal process that anyone implicated in such a complex situation goes through, involving a range of aspects including legal, family-related, social, political and sexual.”

In the film, the audience becomes “a judge or prosecutor of sorts, shaping their judgement about the truth from the information provided by the script as well as from the gestures and intimate behavior of a protagonist whose inner world cannot be accessed, whose face is as opaque as doubt.”

The film is produced by Rei Cine (“Zama,” “The Queen of Fear”) and K&S Films (“Wild Tales,” “El Angel”), and co-produced by Telefe and Piano. World sales are being handled by Vicente Canales at Film Factory Entertainment.