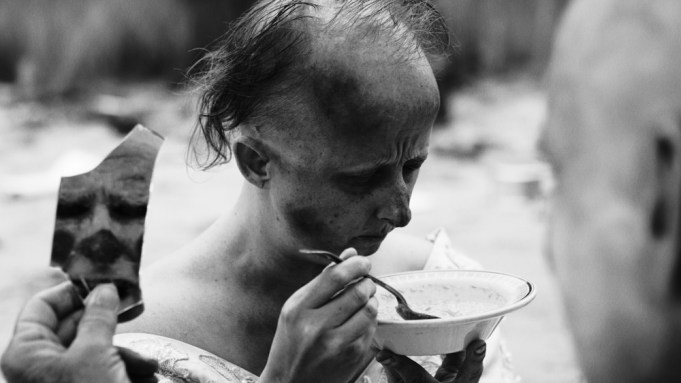 Variety has been given exclusive access to the trailer for “Reflections in the Dust,” which blends factual interviews with an ominous post-apocalyptic tale. The Australian feature film from 23-year-old Luke Sullivan world premieres at the Karlovy Vary Film Festival.

The film is “a tragic portrait of loneliness and isolation set on the edge of a mysterious swamp, where a girl and her father – a paranoid schizophrenic clown – are struggling to live,” according to a statement. “As fear, paranoia and anger consume these lost souls, the film sporadically switches between this fictional world and increasingly traumatic real-life interviews, until it reaches a shocking conclusion.”

The film tells its story through “claustrophobic, vivid imagery along with the physical and raw performances of the protagonists and an unsettling soundtrack.”

It stars Robin Royce Queere and Sarah Houbolt, who is blind and suffers from the rare Hallermann-Streiff syndrome. She is a physical theater and circus performer, ex-Paralympian, and advocate for disabled inclusion.

The film plays in Karlovy Vary’s Imagina section, which is for films with an “unconventional approach to narration and style, distinctive and radical visions of film language,” according to the festival. The film is produced by Australia’s Sonder Pictures, and LevelK is assisting with worldwide streaming and digital distribution.

Karlovy Vary runs June 29-July 7. Variety will be publishing its digital daily newsletter, the E-Show Daily, from the event.