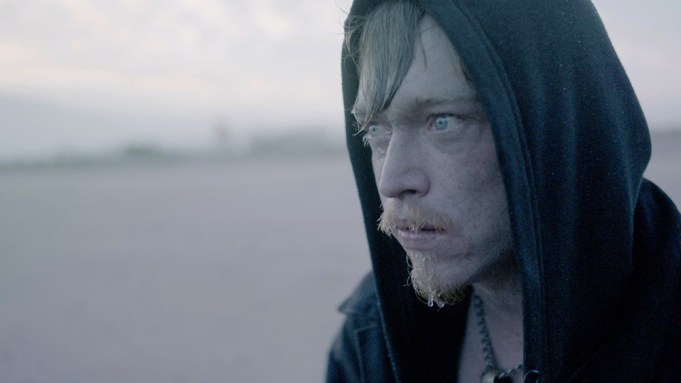 Caleb Landry Jones’ role in “To the Night,” Austrian writer-director Peter Brunner’s competition entry at the Karlovy Vary Film Festival, caused the actor no shortage of ups and downs.

The energetic 28-year-old Texan, who has taken on a wide range of roles with directors including David Lynch, the Coen brothers, Martin McDonagh and Sean Baker, admits the part of Norman was particularly taxing.

“Yeah, I can cry a lot,” Jones says, laughing. “After making the movie it wasn’t too hard to be in touch with the emotions – they were all really surface level for about a good half a year.”

He maintains that he never quite lost himself in the madness of his character, but admits “there were times I was glad we didn’t do another take afterward. I was exhausted, I was tired most of the time. But then this was good.”

An obsessive artist trapped by the trauma he suffered as a child in a fire that took his family, Jones’ character battles his anxiety, creative impulses and conflicts over the care of his infant son with partner Penelope (Eleonore Hendricks). He spends his time constructing re-enactments of house fires, binding himself and self-inducing unconsciousness.

The role had elements in common with past roles as obsessive or unstable characters he has played, he says, but Brunner’s script confronted him with new challenges.

The 27-day shoot, involving multiple physical restraints, fires, fights, breakdowns and intimacy with characters who appear, like homeless drug addicts, was a powerful attempt to use film as art, Jones says.

“People aren’t really using it as art, as art is meant to be expressed,” he says. “It’s so much harder to do that. Peter’s script was no ‘Jurassic World.’”

Despite the top-level directors Jones has been able to work with, he says, choosing a role is primarily based on script for him.

“If the script doesn’t do anything to you, nothing’s probably going to do anything for you. If Peter didn’t want to meet me and had said, ‘Caleb, you got the part,’ I’d have done it in a second because of the way the script is.”

Brunner, a musician and filmmaker who won a special jury prize at Karlovy Vary in 2015 for his original drama “Those Who Fall Have Wings,” wrote in his new film a script “coming from a pure place,” says Jones.

When they first met in L.A., Jones recalls, “Peter was so serious… and thought that maybe I wasn’t serious enough because I’m smiling and saying, like, ‘Wow, this is exciting.’”

But Brunner’s respect for Jones was just as serious, the director says, admitting he was astonished by the energy of Jones’ performances in films such as “Contraband” with Mark Wahlberg. Still, he felt a need to warn Jones that the role of Norman would be overwhelming.

“Peter was saying, ‘Caleb, this is going to be hard,’” the actor recalls.

But the profession now means more to Jones than it did during his first career successes, he says.

Laughing again, he says, “The opportunity to do that is crazy – or to get to be around that.”